Towards the end of a session in Dhaka in late November at the Hay Literature Festival, where my book on Bangladesh was launched, when the moderator, Qayyum Khan, also a freedom fighter, opened the floor to questions, one man spoke cryptically, asking me about what can a small country do when it is surrounded by a larger country. He was clearly alluding to India and Bangladesh. 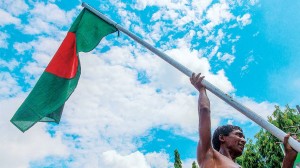 I said there were similar concerns in Mexico about the US, in Myanmar about China, and in other smaller countries surrounded by a bigger one. The man seemed unconvinced; India, being bigger, was not doing enough, he seemed to say.

Later that week I met a few Indians living in Bangladesh—as officials or corporate executives—and I heard another complaint: Bangladeshis don’t trust us in spite of what we did for them. That was a clear reference to the 1971 liberation war, when some 10 million East Pakistani refugees found home in India, and India supported the Mukti Bahini and retaliated when Pakistan attacked India 43 years ago this week.

The Pakistani army surrendered within two weeks; Bangladesh was free; Indian troops returned to India within months, and a large majority of the refugees went home to Bangladesh. India played a major role in Bangladesh’s independence but it cannot continue to seek gratitude. Bangladeshis remind India that their country’s birth was to India’s strategic advantage, and indeed many Indian soldiers died, so did hundreds of thousands of Bangladeshi civilians, and perhaps as many as a quarter million women were raped. Could Indians be sensitive to that suffering?

And yet, four decades after the war, many in India feel Bangladesh is ungracious, if not ungrateful, and many in Bangladesh think India is deeply patronizing. To that, add governmental failure on both sides to agree on sharing rivers, to increase cross-border trade, and making travel easier. Sometimes, travelling across the border gets bloody. A year ago in Chittagong, a businessman recalled how in 1971 when he was a boy he knew of children reaching the Indian border hoping to cross it to safety, even as Pakistani troops patrolled the border, trying to prevent refugees from fleeing. Would-be refugees would wait for Indian jawans to signal when it was safe to cross the border. Once they were across, jawans would lift them and take them to safety.

I liked hearing that story, until he added: “Why, then, does the Border Security Force (BSF) now shoot poor Bangladeshis at the border?” Bangladeshis want to buy Indian cows; they want to sell Tangail saris, he said, and told me about videos he had seen on the Internet which showed BSF jawans beating poor peasants. Reports from credible human rights groups have documented disproportionate force on the border. That does not inspire trust, nor does it make Bangladesh grateful towards India. Ghosh’s novel is set in Kolkata, Dhaka and London, and weaves together memories across time and place. Central to its plot is the division of Bengal.

A grandmother is planning to visit Dhaka and asks innocently if she would be able to see the border from her plane. Her son laughs and asks her if she thought that the border was a long black line with green on one side and scarlet on the other, “like it was in a school atlas”. But that was not what she meant, not at all. Surely there is something, she thinks, “trenches perhaps, or soldiers, or guns pointing at each other, or even just barren strips of land. Don’t they call it no-man’s land?…[i]f there aren’t any trenches or anything, how are people to know?…What was it all for then—Partition and all the killing and everything—if there isn’t something in between?” There was an enchantment in those lines, Ghosh wrote later.

The men who marked the borders believed “that there was something admirable in moving violence to the borders…(they hoped) once they had etched their borders, the two bits of land would sail away from each other…” But instead of a separation, they had created an irony, “that there had never been a moment…(when) Dhaka and Calcutta were more closely bound to each other than after they had drawn their lines—so closely that I, in Calcutta, had only to look into the mirror to be in Dhaka; a moment when each city was the inverted image of the other, locked into an irreversible symmetry by the line that was to set us free—our looking-glass border”.

Once again, it was a novelist who captured the larger truth better than coordinates on a map could, giving the answer to the questions full of misunderstandings—from the Bangladeshi in the audience, and from the Indian living in Dhaka, each nursing his private grievance, creating his own wall across the border.

Salil Tripathi is a writer based in London.