Eurosceptic and far-right parties have seized ground in elections to the European parliament, in what France’s PM called a “political earthquake”.

While the French National Front and UK Independence Party both appear headed for first place, the three big centrist blocs in parliament all lost seats, reports the BBC.

The outcome means a greater say for those who want to cut back the EU’s powers, or abolish it completely. 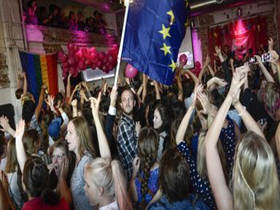 But EU supporters will be pleased that election turnout was slightly higher.

It was 43.1%, according to provisional European Parliament figures. That would be the first time turnout had not fallen since the previous election – but would only be an improvement of 0.1%.

“They no longer want to be led by those outside our borders, by EU commissioners and technocrats who are unelected. They want to be protected from globalisation and take back the reins of their destiny.”

Provisional results suggested the FN could win 25 European Parliament seats – a stunning increase on its three in 2009.

The party also issued an extraordinary statement accusing the government of vote-rigging.

Across the board, the centre-right European People’s Party was set to win 211 out of the 751 seats, with 28.1% across the bloc, according to estimated results issued by the European Parliament. That would make it the biggest group – but with more than 60 seats fewer than before.

EPP leader Jean-Claude Juncker insisted the majority of people had voted to be a part of Europe.

“The extreme right, contrary to what some of the media has said, did not win this election,” he said.

“We will have a clear pro-European majority in this house,” added the man who is the frontrunner to be the next president of the European Commission.

The Eurosceptic Europe of Freedom and Democracy group, incorporating the UK Independence Party (UKIP), appeared to have about the same number of seats as last time, but there looked set to be a rise in the number of non-attached right-wing MEPs boosting the Eurosceptic camp.

UKIP leader Nigel Farage was predicting that his party would come first in Britain, saying: “The inevitability of European integration ends tonight.”

The anti-bailout hard-left group in parliament was set to make big gains, largely thanks to Syriza in Greece and United Left in Spain, gaining about 12 seats.

The latest provisional results confirm a big setback for the centre-right EPP bloc, which is on course to lose about 60 seats, despite still coming top overall.

One of the big stories of the night is the surge in the number of “Others” and “Non-Inscrits” – that is, Eurosceptic MEPs who are independent of any of the existing party groups. There will be about 100 of them. So it will be fascinating to watch how some of the other Eurosceptic groups try to woo them.

It is clear the UK Conservatives have a real fight on their hands to win allies for their reform agenda in Europe. The results so far show that their ECR group has lost seats – perhaps 10 or more. That is probably because of Conservative losses and UKIP gains in Britain.

The election has delivered a big blow to the political establishment in Europe – the establishment that pursued austerity and bank bailouts, at great cost to millions of ordinary voters.

Martin Schulz, the former Socialist president of the European Parliament – said of the FN victory: “It’s a bad day for the European Union, when a party with a racist, xenophobic and anti-Semitic programme gets 25% of the vote.”

The election is the biggest exercise in multi-national democracy in the world. The vote will affect the lives of the EU’s 500 million citizens.

The parliament’s powers have expanded since the last election in 2009, and it is hoping to have a decisive say in who gets the EU’s top job, president of the European Commission.