At least 32 people were killed and over 25 others injured in a fatal road crash at Razzak intersection on Bonpara-Hatikumrul highway in Baraigram upazila on Monday afternoon.

The deceased could not yet be identified. However, most of the deceased hailed from Hiduli Sangrampur village in Gurudaspur upazila of the district. 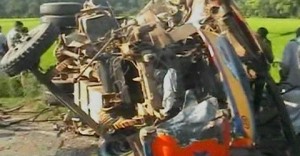 Fuad Rohani, officer-in-charge of Bonpara highway police camp, said the accident took place around 3:30pm when a Rajshahi-bound bus of ‘Keya Paribahan’ from Dhaka collided with another bus of ‘Athoi Paribahan’ heading towards Gurudaspur upazila from the district town, leaving 21 people dead on the spot and at least 40others injured.

The injured were taken to different hospitals and clinics where 11 more succumbed to their injuries, said additional police super of the district Shahabuddin.

Of the bodies, 24 were handed over to their families at Bonpara highway police camp, said deputy commissioner of the district Mashiur Rahman.

After the collision, the two buses got mangled. While the ‘Athoi Paribahan’ bus overturned on the road, another tumbled into the roadside ditch under the impact of the collision.

The accident also disrupted traffic on the highway for an hour.

Soon after the accident, locals rescued 20-25 people from the two vehicles and took them to different hospitals. Later, police and Fire Service men joined them in the rescue operation.

A three-member probe panel, headed by additional district magistrate Mohammad Ali of Natore, has been formed to look into the fatal accident. Its two other members are assistant police super of Natore (Circle) and the assistant director of Bangladesh Road Transport Authority (BRTA).

The committee has been asked to come up with its report within three workdays, said senior information officer at the Road Transport and Bridges Ministry Abu Naser.

The Prime Minister and the Road Transport and Bridges Minister instructed the authorities concerned to take necessary steps to ensure proper treatment of the injured.