In its assessment of the proposed national budget for fiscal 2014-15, Unnayan Onneshan , an independent multidisciplinary think-tank, has said that the government’s fiscal measures may fall short to accelerate the economy to achieve the targeted 7.3 percent GDP growth.

Finance Minister AMA Muhith on Thursday placed in Parliament the Tk 250,506 crore national budget eying 7.3 percent GDP growth with a high hope that this budget will provide necessary guidelines for accomplishing the planned activities of the government.

Stating that the budget is ‘long on targets, short on realities’ in achieving goals, the Unnayan Onneshan said that the share of investment to GDP needs to rise at 34.24 percent in FY 2014-15 in order to achieve the proposed rate of growth of 7.3 percent if the incremental capital output ratio (ICOR) remains constant at the previous fiscal year’s level of 4.69, meaning an increase in investment by 5.55 percentage points from the 28.69 percent in 2013-14. 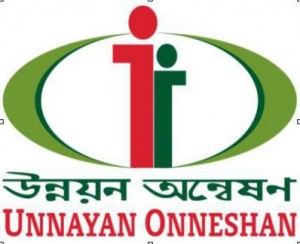 It said alternatively the government has to bring down the ICOR to 3.93, a leap in the productivity of investment, adding that both scenarios seem impossible, mainly due to supply side constraints such as inadequacies in infrastructure and lack of investment confidence owing to political uncertainties.

The think tank cautions that the excessive dependence on financing the deficit of Tk 67,552 crore through domestic borrowing of Tk 43,277 crore, particularly Tk 31,221 crore from banking sources may induce prices to inflate undermining the government’s target of containment of inflation to 7.0 percent from 7.38 percent in April 2014.

Observing gap between savings and investment of 1.6 per cent in 2011-12, 2.14 per cent in FY2012-13 and 1.85 per cent in 2013-14, implying government’s inefficacious fiscal measures in converting national savings into investment, it warns that such trend may induce national output to decline and further flight of capital from the country.

An annual average amount of US$ 1,581 million capital flew from the country during 2000-2008, reducing national capital, the organization mentioned.

Referring to the poor implementation of annual development programme (ADP) in the current fiscal year, it warns that the ADP allocation of Tk 80,315 crore in the FY2014-15 may remain underutilised as only 55 percent of total ADP allocation of Tk 60,000 crore in FY2013-14 has been implemented until April 2014.

Mentioning about decreasing rate of growth in industry, the research organisation notes the lack of infrastructural facilities and consequential implications on the increased rate of unemployment. “The proposal of removing supplementary import duty from industrial goods may further aggravate the declining growth in industry.”

About the infrastructure, the think-tank notes that the gap between installed generation capacity and maximum generation of power has been on increase, while the cost of power supply has increased by 163 percent during 2008-2013.

About the decrease in supplementary import duty on 770 commodities, it anticipates that import of these commodities will increase, which may pose serious challenge to the development of local industries.

Considering the inflow of remittance as a strong pillar of rural economic development, the Unnayan Onneshan finds that the growth of remittance inflow was 12.6 percent in the FY 2012-13, whereas the rate of growth has fallen by 4.8 percent until April of FY 2013-14, thereby exerting pressure on expenditure in rural households.

Calling for prudent and farsighted fiscal management, it said that that proposed actions are inadequate to bring fiscal discipline in the management of deficit, debt and subsidy on the one hand and to increase income in the absence of radical reforms in the tax system on the other.