The government  will buy more rice locally in an effort to replenish reserves while it has no plan to import the grain this year, the head of the state grains buyer said on Wednesday.

Such procurement is crucial for the South Asian nation to feed its poor and keep domestic prices stable at a time when government reserves are at five-year lows.

“We are buying 400,000 tonnes of rice from local farmers this harvesting season, double from the earlier purchase target,” Ahmed Hossain Khan of the Directorate General of Food, the state grains buyer, said. 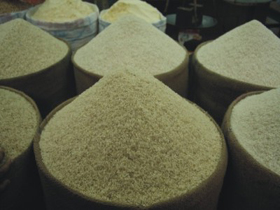 “This time we are getting good response from the farmers as we have raised the price of rice to 30 taka ($0.38) a kilogram from 26 taka a year ago to ensure fair price for them,” he said.

“We have no plan to import rice this year though global rice prices are low,” he added.

Global rice supplies are seeing a sharp increase as the embattled government of Thailand rushes to liquidate its stockpiles in order to pay farmers and avoid further protests.

Bangladesh, the world’s fourth biggest producer of rice, consumes almost all its production at home. In January last year, amid soaring prices of the staple, it backtracked on a plan to scrap a four-year old ban on rice exports.

The government buys rice and wheat from local farmers to ensure a support price for them, build stocks for welfare programmes and to meet any emergency needs.

Bangladesh aims to produce more than 35 million tonnes of rice in the current year, up from nearly 34 million in the previous year.

It often needs imports to cope with shortages caused by natural calamities such as floods or droughts.

Although it did not import rice over the last two years, Bangladesh was ranked as the fourth-largest importer of the grain by the U.S. Department of Agriculture in 2011, with a volume of 1.48 million tonnes.

The state grains buyer has moved to speed up imports of wheat, taking advantage of a slump in global prices of the grain.

Global wheat prices fell 25.6 percent to $6.05 a bushel in 2013 due to oversupply, with benchmark Chicago futures still hovering around that level.