The government is going to set up a 60MW solar power project at Raozan in Chittagong in the private sector.

“This will be the country’s largest ever single solar project with the highest capacity,” Power Division Joint Secretary Siddique Zobair told UNB. 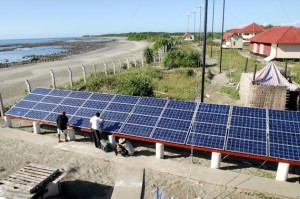 So far, the highest capacity of solar project is of 3MW in Jamalpur. Another solar project of 30MW capacity is now under the process of implementation in northern district of Kurigram.

Zobair, who is dealing with the renewable energy related issues, informed that the government is now conducting a pre-feasibility study to determine the overall cost of Raozan project and its power tariff.

He said the pre-feasibility study is scheduled to be completed by September and then a tender will be invited to select a private sponsor for the project.

According to the official sources, the Raozan solar project was undertaken by the government as part of a plan to generate 500MW solar power by 2015.

They said the government is expecting that once such largest solar project like Raozan is implemented, the cost of solar power will come down to a reasonable level.

They said initially the cost of each unit solar power was about Tk 30. But with the implementation of big scale projects, the generation cost will come down.

They said the solar power cost of Jamalpur is US 18 cents, which is equivalent to Tk 15. “We hope, the per unit cost of solar power at Raozan project will be below Tk 15,” said one official.

He said the Raozan project’s total cost is expected to be about US$ 180 million as there is a thumb-rule that each megawatt solar power cost US$ 3 million.