Building on the success of Huawei Ascend P6, the new 4G LTE-enabled smartphone redefines smartphone excellence with top-notch features, ultra-fast connectivity and easier navigation in a beautifully-crafted design that places it in a class of its own. 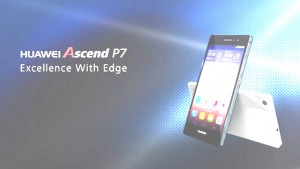 Huawei redesigned Ascend P7 from the inside out, significantly improving the performance of the smartphone’s hardware and software to redefine user experience. At 6.5mm slim, Ascend P7 sets a new record as one of the slimmest 4G LTE smartphones in the market. To relentlessly pursue excellence with edge for discerning global users, Huawei incorporated a perfect harmony of design influences from the West with attention to details from the East.

“Huawei’s relentless commitment to developing premium quality smartphones over the past three years has paid off. We are now ranked number three globally in terms of smartphone shipments, and our brand recognition is growing steadily in key regions such as China and Western Europe,” said, Richard Yu, CEO, Huawei Consumer Business Group. “Today, the launch of Huawei Ascend P7 once again challenges existing industry standards by redefining smartphone design, camera experience, and connectivity, to provide people with an unprecedented mobile experience.”

Huawei is a leading global information and communications technology (ICT) solutions provider. Its products and solutions have been deployed in over 170 countries, serving more than one third of the world’s population. Huawei ranked third in global Smartphone shipments in 2013 according to International Data Corporation (IDC). Huawei has also established more than 16 R&D centers around the world in countries such as the United States, Germany, Sweden, Russia, India, and China. With more than 20 years of rich business expertise in the information and communications technology (ICT) sector, an extensive global network, vast global business operations and partners, Huawei Consumer BG is dedicated to bringing the latest technology to consumers, offering a world of possibilities and creating extraordinary experiences for people everywhere.