India will soon launch regular shipping service to Myanmar and Bangladesh, a move that would help strengthen ties with the two immediate neighbours.

While Shipping Corporation of India (SCI) is likely to start fresh shipping lines to run container ships between India and Myanmar in October, sources said commercial trial run of vessels on India-Bangladesh coastal routes will begin in the same month. Officials said that the regular coastal shipping between Bangladesh ports and India’s eastern ports such as Paradip and Haldia may commence by this year-end. 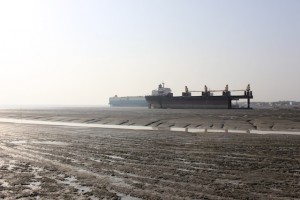 With the commencement of India-Myanmar direct shipping service the transit time for Indian exports to Myanmar and Indian imports from the eastern neighbour would reduce considerably. Sources said the SCI would get some subsidy for the first six months.

At present, there are no liner services between India and Myanmar. So, ships ply between the two countries only when there is full cargo. India and Myanmar have agreed to enhance their trade to $3 billion by 2015.

To push India-Bangladesh coastal shipping arrangement, Bangladesh shipping department last week wrote to his Indian counterpart that the agency has received a list of 18 vessels from the ship owners association for operation. Since India had suggested in June this year that Indian Registrar of Shipping can assist in certification of Bangladesh vessels, Dhaka has now informed that these ships will be available for inspection from first week of September.

In June, the two sides had signed an agreement to finalize the standard operating procedure (SOP) for coastal voyages between the two countries. “We will give national treatment to all certified vessels to operate along our coast. We will follow same standard as it is in the case of our domestic vessels to promote the trade and cooperation,” said a government official.

Bangladesh is developing a mechanism whereby their government insurance company – Sadharan Bima Corporation – would come up with the policy coverage for coastal ships equivalent to $10 million.