They are worried because the water might back backflow and siltation.

“Now we are trying to address the problems and we can easily resolve it,” he said at a workshop on Multi-Stakeholder Engagement on Water Resources Management in Bangladesh at a city hotel on Wednesday. 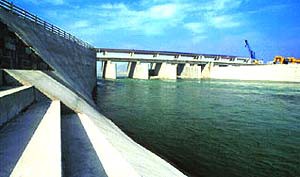 Bangladesh needs to complete the project as soon as possible to have sufficient positive impact of the project for both the countries so that at the time of next round of negotiation for Ganges treaty, it would be easier for Dhaka to convince New Delhi, the minister said.

Bangladesh and India share 54 common rivers. Ganges Barrage is a $4bn project and Bangladesh has sought Japanese assistance to implement the project.

He hoped that India would keep its promise and sign the Teesta water sharing agreement with Bangladesh.

Bangladesh and India were supposed to sign Teesta water sharing agreement in 2011 but due to strong resistance from West Bengal Chief Minister Mamata Banerjee, it could not have happened.