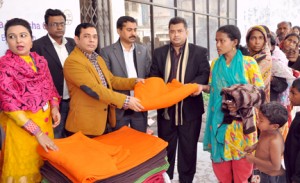 In his short speech Ln. Mohammad Mizanur Rahman said that Lions Club of Dhaka Dilkusha Green has been working for poverty alleviation with a view to develop the social economic of our country.

In this regard club has distributed blankets among the cold stricken people for the welfare of the society as well as the whole nation.