A prize giving ceremony has been held by the entrepreneurship of Lotto Bangladesh for the competitors of drawing pictures and writing stories titled “Sonar Bangla Gorbo” recently. 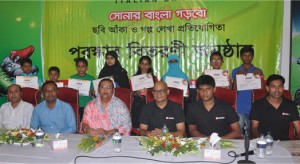 The Ex-President of Khulna Press Club Begum Ferdoushi Ali was present in the ceremony as chief guest. The Chief Executive officer of Lotto Bangladesh Mr. Abdullah Al Mosaddek, journalists of Khulna and many other eminent personalities were present at that time.

Responding to this arrangement student more than 100 school and collage of Khulna attended this competition. Crests and certificates have been given among the competitors of drawing pictures and writing stories and the winners of every group have been rewarded.