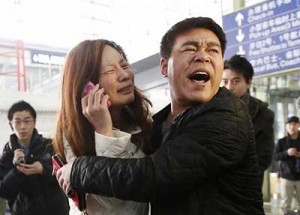 He told a news conference that Flight MH370 lost contact with the Subang Air Traffic Control at 2:40am Saturday, about two hours after taking off from the KL international airport.

“They mounted the search-and-rescue operation a few hours ago. And they are still working on it. We have to wait for the result.

So far, we have not received any confirmation that any plane landed in Nanming, China. We lost contact at about 2:40am, that’s the radar contact.

“The last position reported was about 120 nautical miles east of Kota Baharu, in the South China Sea. There was no indication of a distress signal from the aircraft,” he said.

Ahmad Jauhari also explained that the weather was fine at that time.

“There was no bad weather situation at that point. We are setting up another response centre in Beijing, besides at KLIA,” he said.

He said the aircraft was carrying 227 passengers, two of them infants, and 12 crew.

“Our focus now is to work with the emergency responders and authorities and mobilise their full support. Our thoughts and prayers are with all affected passengers and crew and their family members,” he said.