Bangladesh is a classic case of a low- and middle-income country achieving the unachievable which many others failed to. It reduced its maternal mortality by 66 per cent between 1990 and 2010; the reduction was 40 per cent between 2001 and 2010 alone. 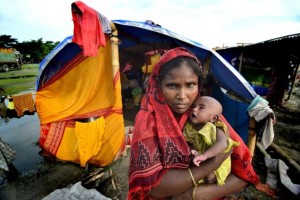 As per the 2012 WHO estimates, the average annual rate of decrease was 5.9 per cent during the period 1990 to 2010, which is more than the Millennium Development Goal 5 target of 5.5 per cent or more. What is more surprising is that the reduction in MMR (maternal deaths per 100,000 live births) was almost the same in both the urban and rural areas.

At the current rate of (MMR) reduction, Bangladesh is well on its way toreaching the MDG 5 target of 143 per 100,000 live births this year — a year ahead of schedule.

So how did Bangladesh, one of the poorest countries in the world with the highest population density and where 75 per cent of the population lives in rural areas, achieve it? “It’s a difficult question to answer. Several different things happened and they were interlinked,” said Prof. Shams El Arifeen, Centre for Children and Adolescent Health, ICDDR, B, Shaheed Tajuddin Ahmed Sharani, Dhaka. “If you were to highlight the factors, the status and value of women have improved. They are more educated and have access to finance. Discrimination against women has come down… there is quite a bit of evidence of that.”

Education has in turn increased women’s willingness and ability to seek health care. “Education for women in the 15-24 years age group is particularly important… there is a revolution happening with 80 per cent literacy among women in this age group…It is the time when they are starting their reproductive life and having families and babies. A big factor is [that] the government is consistent in encouraging education regardless of which political party is in power,” he explained. “In villages can see more girls are educated compared with boys.”

Besides the obvious benefits that come with education, like greater employability and more resources in hand, education among girls has led to reduced fertility. This has had a direct impact in reducing both maternal mortality and child mortality.

As a result of reduced fertility, each individual is only replacing himself. “Every couple produces no more than two children. I couldn’t have imagined this 20 years ago,” he pointed out.

As a result of reduced fertility, one third to one half of women who deliver are first time mothers. “Twenty years ago, each couple would have had five children,” Prof. Arifeen said. It is known that mothers have a greater risk of dying when they have greater parity. “So we don’t see high risk deliveries happening now. There are fewer chances of maternal mortality. There is a shift from high parity high risk to low risk low parity,” he noted.

According to a paper published today (June 30) in The Lancet (Prof. Arifeen is the first author), the fertility reduction led to MMR reduction through two mechanisms. While there was 21 per cent deaths averted through reduction in the number of births, a shift towards more younger women (aged 20-34 years) and those with fewer children delivering babies contributed an additional seven per cent reduction in MMR.

One more unique thing is, Bangladesh has a “valid, nationally-representative household survey-based statistical evidence of progress towards MDG 5,” the journal notes. This is just one of the many factors that differentiateBangladesh from India. The first survey in 2001 included 100,000 households and the second in 2010 covered 174,000 households.

Bangladesh witnessed a 40 per cent reduction in maternal mortality during the period the 2000 and 2010. A three-fold increase in deliveries by medically trained healthcare providers was one of the important factors; deliveries attended by midwifery were, however, low (3 per cent).

While there has been an improved access to and use of health facilities, it is the private sector that people most often turn to. There has been only a fair bit of investment in the public health sector. “The private sector is more expensive,” Prof. Arifeen admits. “The problem is that the ultra-poor don’t benefit. So have to worry [about] how to provide help to that stratum. We definitely need to provide affordable care to everybody.”

He does see the Indian model of more public care spending as an advantage to the socioeconomically backward class. “There is lot to learn from India’s experience,” he admitted. “We are talking about universal health coverage. Affordable service is a part of health coverage. We must provide some sort of safety net for the poor.”