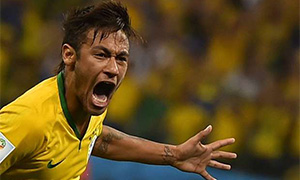 It could be a while before Brazilian football fully recovers from the psychological damage of their humiliating 7-1 World Cup loss at the hands of Germany, but newly installed manager Dunga hopes that a new captain can accelerate the healing process.

On Thursday, Dunga, who wore Brazil’s armband himself when the team won the World Cup in 1994, appointed Neymar as the Seleção’s new captain and confirmed that the decision had already been made at a meeting on Tuesday.

“He’s a reference and he’ll deal with it calmly,” said Dunga about Neymar. “He liked having that responsibility and was very happy.”

Dunga went on to add that the Barcelona superstar’s desire to challenge and win are two requirements that every captain should have, part of his decision to hand Neymar the armband.

For those wondering why Thiago Silva is being stripped of Brazil’s captaincy, it could have something to do with his lack of composure during the team’s round-of-16 shootout versus Chile.

The psychological pressure reduced a number of Brazilian players to tears before the first penalty had been taken, and Silva even requested that he not take a penalty, instead opting to sit alone on the touchline and watch his teammates step up to the spot.

Of course, this is purely speculation, and Dunga’s decision is likely also a symbolic attempt to move on from Brazil’s World Cup collapse.