John O’Keefe, May-Britt Moser and Edvard I. Moser won the Nobel Prize in Physiology or Medicine for their discoveries of cells that constitute a positioning system in the brain. 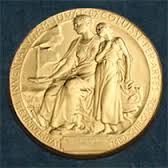 Last year’s Nobel prize for medicine was awarded to three U.S. scientists — James Rothman, Randy Schekman and Thomas C. Suedhof — for detailing how a cell’s transporters navigate and drop off hormones and other molecules, opening avenues of research into treatments for diabetes as well as neurological and immune disorders.

Annual prizes for achievements in physics, chemistry, medicine, peace and literature were established in the will of Alfred Nobel, the Swedish inventor of dynamite, who died in 1896. The Nobel Foundation was established in 1900 and the prizes were first handed out the following year.

An economics prize was created almost seven decades later in memory of Nobel by the Swedish central bank. Only the peace prize is awarded outside Sweden, by the five-member Norwegian Nobel Committee in Oslo.

The Nobel Prize in Physics will be announced tomorrow.