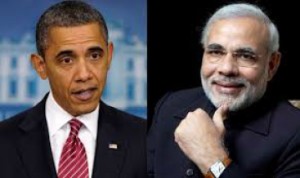 The announcement was made in a tweet by Modi, who called on listeners to send in their questions for the January 27 edition of ‘Mann ki Baat’ (‘From the Heart’), which is usually in Hindi.

“This month’s ‘Mann Ki Baat’ episode will be a special one, where our Republic Day guest @BarackObama & I will share our thoughts together,” Modi said.

The programme will illustrate “a special bond between India & USA”, the prime minister added on Twitter.

Obama is due to arrive in New Delhi on Sunday, the first sitting US president to make a return trip to India.

As well as holding bilateral talks, the two men will watch India’s Republic Day parade together on Monday and address an audience of business leaders from both countries.

Obama will be accompanied by his wife Michelle. The first couple are expected to visit the Taj Mahal, in the northern city of Agra, at the end of the visit on Tuesday.