The country’s CNG refueling station owners have placed a 3-point demand to survive being upset at the ongoing political turmoil that has taken a heavy toll on their business.

Their demands are rescheduling due payment against bank loan by at least one year without charging interest and taking interest in the block account, allowing payment of gas bills through installments for one year without disconnecting gas lines, refraining from treating any CNG station owners as loan defaulters until the return of a normal business environment. 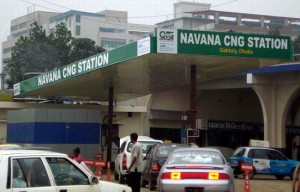 Nayan said they have been incurring a gross loss of Tk 7 crore a day for last three months since the hartal and blockade started.

“The transport sector in general and CNG refueling sector in particular has been the worst victim to the political confrontation as our business has nearly collapsed,” he said.

Nayan said most of the country’s 585 refueling stations now cannot to pay wages of their workers. “We can’t afford anymore.  We urge both the ruling and opposition to save us from the ruination,” he said.

He mentioned that many stations have turned out defaulters in making payment of gas and electricity bills to the authorities concerned.