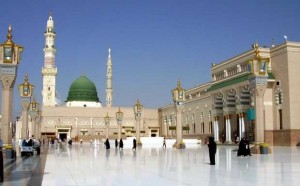 The Saudi government has denied reports of plans to destroy the tomb of the Prophet Mohammed (PBUH) in Madinah, Al Arabiya reports.

Ahmad Mohammad al-Mansouri, the spokesman of the General Presidency of the Two Holy mosques, reiterated the organisation’s view, saying the academic’s proposal was his alone.

On Monday, Britain’s The Independent newspaper reported that the tomb of the Prophet Mohammed in the holy city could be “destroyed” and the prophet’s remains removed to an anonymous grave.

The daily said the controversial proposals were part of a consultation document by a leading Saudi academic that had been circulated among the supervisors of the Prophet’s Mosque.

The Independent has been accused by Mowafaq al-Nowaysar – deputy editor in chief of Saudi Arabia’s “Makkah” newspaper – of “theft” and “mistranslating” an Arabic article that appeared in the Saudi daily on August 25 on the subject.

In response to the allegations of “theft,” Deputy Managing Editor at The Independent, Will Gore, told Al Arabiya News on Wednesday they were “not aware of Makkah’s report”.

The Independent had claimed the story as an exclusive, and many British news sites carrying the news have credited the paper as breaking the story.