International Business Forum of Bangladesh (IBFB) organized a Stakeholders Meeting on Developing Satellite City under Public Private Partnership (PPP) on Thursday (29th of May 2014) at its Banani Office in the city. The meeting was presided over by the Mr. Hafizur Rahman Khan, President of IBFB and moderated by Mr. Mahmudul Islam Chowdhury, Founding President of IBFB where Mr. Suhel Ahmed Chowdhury, former Secretary, Ministry of Housing & Public Works, Ministry of Shipping and Ministry of Commerce presented the Keynote Paper. 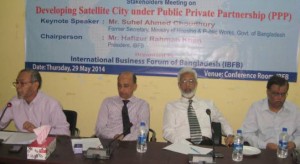 The meeting was organized to pursue the govt. for immediate implementation of decentralization as to reduce over population, huge traffics and other associated burdens from the capital and to introduce a well-planned urbanization and development involving private sector under Public Private Partnership (PPP) keeping in view of 100 years to come, say Vision 2121. The key points discussed in the meeting were as follows:

The Stakeholders Meeting will be followed by a national seminar on the same topic to be held on 10th June 2014 at Pan Pacific Sonargaon, Dhaka where Engineer Mosharraf Hossain, MP, Honorable Minister, Ministry of Housing & Public Works will be present as the Chief Guest.