The stall distribution programme of REHAB Fair 2014 was held on Wednesday at Simanto Convention Center in the capital. Stall has been distributed through open lottery among the 155 participants companies. ‘REHAB Fair 2014’ will be held at Bangabandhu International Conference Center (BICC) from March 20 to March 24, 2014. 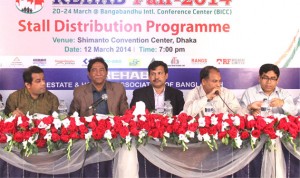 A total 155 companies including 141 real estate and developer companies and 14 building materials companies will participate in REHAB Fair 2014. Among them 11 are co-sponsors.