The UK’s favourite cuisine was once again celebrated at the ninth, annual British Curry Awards on Monday at Battersea Evolution, as the nation’s finest curry restaurants were honoured at undisputedly the most lauded event of the UK hospitality sector. 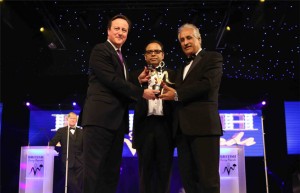 The event was hosted by TV personality, Chris Tarrant.

With the UK curry industry boasting 10,000 restaurants and 80,000 employees, and contributing a staggering £3.6billion annually to the economy, British Curry Awards has been lauded as a national institution in its own right, with the Prime Minster fondly coining them the ‘Curry Oscars’.

Speaking at the event, David Cameron said, “The curry industry has been contributing, achieving and rising and that is the spirit we need more than ever in this country today. From the bottom of my heart, let me say thank you for everything you give to our country. Thank you for the tremendous kindness that you have shown me this evening, I wish this Great British industry every possible success in the years to come.”

Founder, organiser of the British Curry Awards and restaurateur Enam Ali MBE said, “one million British Bangladeshis now live in Britain and many still have families, inherited land and numerous businesses in their homeland. While I appreciate it won’t be high on the government priority list, I would ask the Prime Minister to do what he can to ensure that our families, our businesses and land interests are protected in the face of the current instability”.

“As a leading commonwealth country, I believe British influence can be used to diffuse the political turmoil that is threatening everyday life in the lead-up to elections”, he added.

From a staggering 236,000 public nominations received this year via app, email and post, winners were selected from their respective category shortlists and announced at the event as follows: