Robi Axiata Ltd, in partnership with the Bangladesh Army, successfully concluded a dry run for the creation of the world’s biggest Bangladesh Flag, at the National Parade Ground, Sher-E-Bangla Nagar on Saturday.

The dry run was concluded with the participation of 8,000 volunteers solely from the armed forces. The dry run is the final step towards the creation of the largest human flag on the morning of 16th December with nearly 30,000 volunteers from the Bangladesh Army, school children, and the general population, comprising mostly of the youth and enthusiastic professionals. 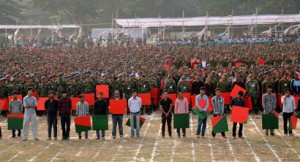 This Victory Day, Robi, with active participation of the Bangladesh Army, plans to gather almost 30,000 people at the National Parade Ground to collectively create the world’s largest flag and shatter a standing Guinness World Record. The main objective of this attempt is not only to celebrate Victory Day this year but also show the world the inner strength and unity of the people of Bangladesh.

If the attempt is successful it will be recorded in the Guinness Book of World Records. Previously the largest human national flag was created in Pakistan, on 21 October 2012, with 24,200 participants attending the Punjab Youth Festival at the National Hockey Stadium in Lahore, Pakistan. The placards, held above their heads, collectively depicted the Pakistani national flag.

A Guinness-accredited auditor will be present to oversee the attempt in Bangladesh. After successful completion of the event all relevant documents and images will be sent to the Guinness World Record committee for validation.