Robi Axiata Limited, the country’s leading mobile phone operator, organized a workshop with noted young photographer Prito Reza for up and coming amateur photographers of the country, with an aim to improve their talent.

The workshop, held at studio in Niketon, Gulshan, was designed for the top 40 contestants from the Robi Photo School competition titled ‘Group Selfie Photography Contest with Renowned Photographer Prito Reza.’

The ‘Selfie’ is when a photographer takes a photograph of themselves and others using the camera on their mobile phone. Recently, Robi Photo School focused on a recent global phenomenon called the “Selfie” and helped it become very popular all across Bangladesh. 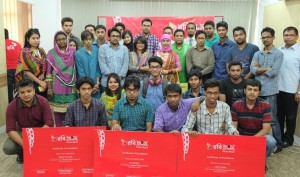 Robi Photo School asked photographers to celebrate the relationship with the people they cherish e.g. nephew–niece, siblings, or a blend of different friendships.

Prito Reza, supported Robi Photo School and created a “Group Selfie” Tutorial, which was launched digitally and is available for viewing on Robi’s Facebook page.

During their hour-long workshop with Prito Reza, who was also the contest judge, participants learnt basic skills of Selfie photography and other related skills. After the workshop the winners of the competition were announced in two categories – Judge’s Choice and people’s choice categories.

The prize giving ceremony was held at 4pm, immediately after the workshop. Toffael Rashid, Executive Vice President, Robi Brand and Marketing, and Prito Reza were present on the occasion.

The announcement for the contest was through video alone and was launched through Facebook and Youtube on 13th February, 2014. Contestants submitted their photos from February 13 to February 17, while votes were received from February 22 to February 28.