With all the eight nations signing a last-minute deal to create a regional electricity grid and Indian Prime Minister Narendra Modi and his Pakistan counterpart Nawaz Sharif shaking hands after the first-day tension, the 18th Saarc Summit concluded here on Thursday.

The Summit came to an end in the afternoon with the adoption of a 36-point Kathmandu Declaration 2014. 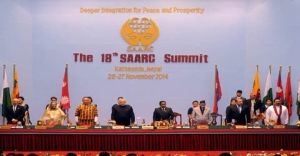 In his concluding speech, Koirala expressed profound appreciation and gratitude to all the heads of state and government for their cooperation in holding the Summit as well as their presence.

Koirala said the Saarc nations should decide what types of Saarc they actually want and what kind of reform it requires?

The Nepalese Prime Minister said commitment and shared responsibility to establish stability and prosperity in the Saarc region was needed. “We’ll be able to bring tangible progress in the region through cooperation and partnership. Better connectivity is a lifeline of any region to promote trade and people to people contact.”

Koirala continued: “Despite the abundance of resources in the region, why the people of the region should remain in the chain of dehumanising poverty.”

Peace and prosperity is reflected in the common aspirations of the Saarc member countries, Koirala said adding that the growing interest of many countries to engage with Saarc is the testimony of its significance.

He also said regional cooperation was effective and mutually beneficial for peace, harmony, and stability.

Koirala said the next Saarc Summit will be held in the Pakistani capital of Islamabad in 2016.

Earlier, the foreign affairs ministers of the Saarc member states signed the Saarc Framework Agreement on Energy Cooperation and Electricity.

The major elements of the Kathmandu Declaration include: Accelerating the process of creating free trade in the region, formulation and implementation of projects, programmes and activities of Saarc in a prioritised, focused and result-oriented manner and launching regional and sub-regional projects in the agreed areas of cooperation, especially in the areas of poverty alleviation, infrastructure building, connectivity and energy.

Utilising the youth power for socio-economic development, especially through creation of employment opportunities at home and building collective positions for their security and welfare while on employment outside the region, combating terrorism in all its forms and manifestations and having effective cooperation among the member states for preventing the trafficking in persons, arms and drugs and exploitation of children for forced labour.