Leading businesswoman of Bangladesh Selima Ahmad has received the internationally acclaimed Oslo Business for Peace Award 2014 for maintaining commitment to social responsibility and ethical values. She was given the award amidst a special function on May 15th, 2014 in the City Hall, Oslo; the same auspicious venue where the Nobel Peace Prize is presented every year. 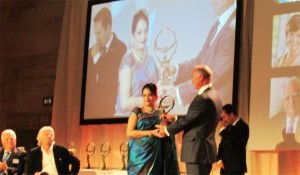 This award is considered the highest form of recognition given to individual business leaders for fostering peace and stability through creating shared value between business and society. The Oslo Business for Peace 2014 Honourees were selected by the Foundation’s independent consisting of Nobel Prize winners in Peace and Economics.

Before the awards were handed over, senior BBC news presenter Nik Gowing moderated a five-minute tête-à-tête with all 2014 Business for Peace Honourees.

Selima Ahmad was the first to go on stage and share her feelings. Responding to one of Gowing’s questions, she said people of Bangladesh were enthusiastic and brave and they used every opportunity they got to contribute to development.

She said, “My honor is the honor of all Bangladeshi women entrepreneurs. I’m very happy that I brought this honor to my country.”

“It’s also reminding me that my responsibility has now increased”. “I will continue my work with renewed vigour to ensure that woman entrepreneurs play more significant role in Bangladesh’s economy,” she added.

Selima Ahmad is the Vice Chairperson of Nitol Niloy Group and Founder of Bangladesh Women Chamber of Commerce and Industry (BWCCI). She is also a director in the board of Sonali Bank Limited, the largest public commercial bank of the country and a Global Ambassador of The International Alliance for Women (TIAW).

Her Company Her company Nitol-Niloy Group is one the reputable leading business house in Bangladesh having 26 companies amongst which six are joint venture and three public companies which includes automobiles, cement, paper, real estate, electronics and financial services. She has been working for the private sector development for last 28 years and with her deep understanding of the plight of women in a male dominated society, she focuses on developing entrepreneurial talent, and organizing financial and marketing resources in order to enable women to overcome hurdles and expand their business beyond the micro threshold. She founded Bangladesh Women Chamber of Commerce & Industry (BWCCI) in 2001 being acutely aware of the need for a national body to represent the interest of women entrepreneurs and support their initiatives and developed more than 7,000 women entrepreneurs. Ahmad is an advocate who promotes democracy, gender equality, anticorruption and women entrepreneurship not only in Bangladesh but around the globe.

She has focused on helping women in Bangladesh to overcome obstacles in expanding from the micro-entrepreneurship to the next level.

Phenomenal success in business and passion to excel through ethical processes and responsible business practices helped Selima win this prestigious award. She has also won the Islamic Development Bank (IDB) prize 2012 for Women’s Contribution to Development, Jeane J. Kirkpatrick Award 2013, TIAW World of Difference Award 100, 2010 and many others.