Makoto Takazawa and his father Yukio earned 1.7 million yen ($16,700) last fiscal year selling electricity from solar panels that hang in a giant canopy above their farm east of Tokyo. The cash was almost nine times more than they made from the crops growing in the soil below. 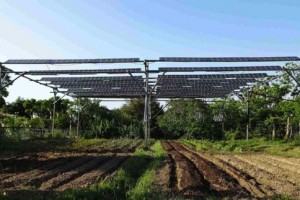 Harvesting dual incomes from sunlight was a godsend to the Takazawas. They’re among the majority of Japanese farmers who depend on a combination of outside work, pension payments and government subsidies to make a living. The easing of land-use rules and mandates for utilities including Tokyo Electric Power Co to buy clean energy at premium prices is poised to fuel the spread of panels to more farms.

“I was racking my brain to figure out what to do on this land that I’ll take over from my father one day, because growing rice and vegetables doesn’t bring in much money,” Takazawa said. “Then I heard about solar sharing for farmland.”

The government is dismantling a subsidy system that’s supported Japan’s rice production for four decades. The country is under increasing pressure from trading partners to roll back import tariffs of 778 per cent for the grain, along with levies of more than 300 per cent on sugar and butter.

Takazawa, 51, still works full time in machinery sales while his retired father, 78, tends the farm in Chiba prefecture most days. Sixty-eight more farms across Japan have approval to follow in their footsteps and set up solar panels, according to JA Group, the country’s biggest agricultural organization.

The checkerboard of panels hanging from stilts about three meters (10 feet) above the farm in Chiba cut sunlight to the vegetables by about 30 per cent without harming growth, the younger Takazawa said. The government requires solar-sharing farmers to maintain agricultural output.

The system, patented by Japanese engineer Akira Nagashima, covers an area about half the size of a soccer pitch and produces enough electricity to power 10 households.

“This dual-use concept does offer the potential for another revenue source for the farming community,” said Tom O’Sullivan, the founder of Tokyo-based energy consultancy Mathyos. Wind farms are more popular on rural properties in other countries because they take up less land, he said.

Japan has more than doubled solar capacity to about 13,500 megawatts since beginning a clean energy incentive program in July 2012 in the wake of the atomic meltdown, according to data from the trade ministry through February this year.

The nuclear plants that produced about a third of the nation’s electricity before the 2011 quake and tsunami remain idled. Fossil fuels such as liquefied natural gas and coal now account for 88 per cent of power produced in Japan, the nation’s utilities association said last week.

While renewable sources that also include wind and geothermal account for just 2.2 per cent of electricity generation in Japan, approved new projects point to a further threefold rise in solar, according to government data.

The nation is projected to be the world’s largest market in 2014 behind China for new solar installations, according to a report this month by Bloomberg New Energy Finance.

In their agreement with Tokyo Electric, operator of the crippled Fukushima facility, the Takazawas will sell their solar crop at 40 yen per kilowatt-hour plus tax for two decades.

Power can be generated from burning coal, one of the cheapest sources of fuel, for an average 9.5 yen per kilowatt-hour, according to a 2011 report from the Japanese cabinet. Utilities pass on the extra expense of clean energy in surcharges to consumers.

O’Sullivan of Mathyos said a trend toward lowering the prices suppliers like the Takazawas can charge may eventually reduce attractiveness of solar sharing.

Japan Finance Corp, a government-affiliated lender, sweetened the deal with a 12 million yen low-interest loan for the project. Most of that was used to purchase solar panels from closely held Looop Inc, a Tokyo-based company that makes the equipment in China, according to Takazawa.

Nagashima’s system operates on the assumption that too much sunlight can sometimes be a bad thing. The canopy is arranged to allow in enough to maximize growth, but no more.

The Takazawas, who grow taro, sweet potato, pumpkin, blueberry and leafy vegetables, said yields for some of the plants increased under the shelter of the panels because the soil retained more moisture.

Their property 50 kilometers (30 miles) from Tokyo also includes rice paddies, which Takazawa said may be less suitable to solar farming. The family is considering turning them into orchards and buying more panels, he said.

On the northern island of Hokkaido, home to Japan’s biggest cattle herds, dairy farmers are erecting solar panels over properties in the town of Hamanaka and branding their product “Eco Milk,” according to the agriculture ministry.

“Farming communities have plenty of unused resources for clean energy,” said Masahide Sugimoto, an assistant director in the ministry’s renewable energy policy division. “We want people to use them.”