The flood we experienced last year was devastating. But this year, we did not have to move from our home, as our homes are on higher and safer ground.” said a smiling thirty-five year old Sharifa Begum, standing in front of her thatched home on a small plot of elevated land in Datiar char, Chilmari. Elevation from the ground saved her home from the flood that inundated Northern Bangladesh during August and September 2014. “In earlier years, my husband and I had to shift homes, even seven times on year, as the rush of the flood water had destroyed our makeshift homes,” she added. Her home, one among a cluster of homes built on an elevated foundation on a sandbar, look like they are on an island. 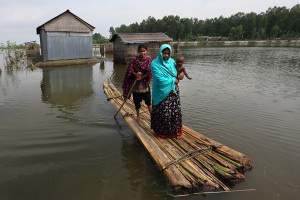 Like Sharifa Begum, many poor families live on sandbars known as chars (shoals) that are spread across the vast Brahmaputra River in the northern Bangladesh. Resident who live on these vast stretches of dry, sandy land usually make living from fishing and farming. Agriculture is difficult in the sholas because of the presence of sands and frequent inundation of water. During the dry season, they move by walking and cycling. Electricity is scarce and wood is mostly used as cooking fuel. In early August, rivers like Brahmaputra, Dharla and Teesta in the north western Bangladesh starts to over flow. Frequent floods devastate poor and marginalized communities, destroying their homes and precious assets, year after year.

Climate change scenarios suggest an increase in extreme rainfall coupled with the melting of the Himalayas will contribute to a greater frequency of riverine and flash floods. The Bangladesh Climate Change Strategy and Action Plan has identified inland monsoon flooding and tropical cyclones accompanied with storm surges as two of the three major climate hazards for Bangladesh.

To address extreme inland monsoon flooding, the government of Bangladesh has undertaken Community Climate Change Project (CCCP) under the Bangladesh Climate Change Resilience Fund (BCCRF). The project aims to help communities on adapt to extreme climate changes. CCCP has already helped around 15,000 households to save their assets and livelihoods from flood. The project supported participating communities to raise the household plinths and provide opportunities for better and secured livelihood.

The CCCP project empowers local organizations that can access remote areas where the most vulnerable communities live. On a competitive basis, the project provides grant financing to various NGOs to help communities build long-term resilience to climate change impacts. The project focuses on the three most vulnerable climate zones in Bangladesh, composed of: saline affected coastal zones, flood-affected areas and charlands, and drought-affected or rain-scarce areas in north-western Bangladesh. Such community-based adaptation to climate change is based on capturing lessons and sharing best practices among the 41 competitively selected NGOs, and beyond.

Many of the homes in the clusters are raised by five feet on average based on highest flood level of that area to protect the families from being inundated with water. The plinths are designed to offer benefits inclusive of growing vegetables, rearing poultry and providing shelter for the domestic animals in addition to providing safe shelter for resident.

In its second year, the project has already made a difference in flood affected regions. The new shelters will continuously be improved with tube-wells, solar lighting, cooking stoves and latrine to be installed on the plinths in the near future.

Beneficiaries did not have to migrate to distant high grounds for shelter this year like before. Their crops are also being protected by elevation. Pointing at the rice seedlings on one of the plinths, Rehana, a local resident said, “Last year the flood destroyed the rice and potato that my husband planted on about half an acre of low land. We hope to recover by growing seedlings in a corner of this raised ground.”

A simple solution like raising the plinths of their homesteads has saved many communities from recent floods. These examples among others demonstrate how CCCP grant financing is supporting the local NGOs and communities to collaborate in finding adaptive solutions to tackle climate change impacts.