India’s iconic Taj Mahal monument is to be given a mud-pack to remove yellow pollution stains, archaeologists say.

The treatment is hoped to restore the natural sheen and colour of the white marble monument.

It will be the fourth time the 17th century mausoleum has had the treatment. 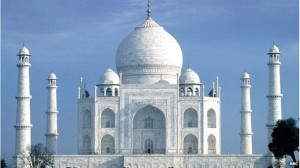 The last mud-pack was applied in 2008, but pollution levels around the monument to love remain high and officials say it needs cleaning again.

The Taj Mahal sits on the bank of the Yamuna River, at the city of Agra in India’s northern state of Uttar Pradesh.

It was completed by the Emperor Shah Jahan in 1653 as a mausoleum for this third and favourite wife, Mumtaz Mahal, who died giving birth to their 14th child.

The monument’s complex structure of white marble domes and minarets inlaid with semi-precious stones and carvings is considered the finest example of Mughal art in India.

In 1983, the Taj Mahal became a Unesco World Heritage site and attracts millions of visitors each year.

But it also has to contend with pollution from the busy and industrial city of Agra and a nearby oil refinery.

“Due to increasing pollution in the city, the white marble is yellowing and is losing its sheen,” B M Bhatnagar from the Archeological Survey of India told the Press Trust of India.

Bhatnagar said the chemical department of the Archeological Survey has already begun the process to make the mud-pack.

The cleaning treatment is said to be based on a traditional recipe which is used by Indian women to restore a natural glow to their faces.

A 2mm-thick layer of lime-rich clay will be plastered over the affected areas of the monument and left overnight to dry, said Bhatnagar.

“When it dries the flakes are removed from the surface with soft nylon brushes and washed with distilled water to remove impurities sticking to the surface,” he said.

“In the last treatment, which cost around Rs. 10.4 lakh ($24,000), a team of two dozen experts had carried out the work in small sections over a period of six months to ensure that the tourist inflow does not suffer,” said Bhatnagar.