West Bengal chief minister Mamata Banerjee’s Bangladesh visit from Feb 19 to 21 has caught the ire of controversial Bengali writer Taslima Nasreen, who has alleged that the CM was shielding Muslim fundamentalists in the state. 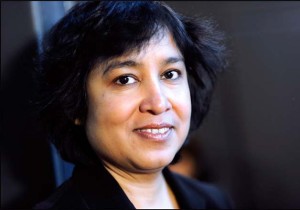 Mamata Banerjee will lay floral wreaths at the Shaheed Minar in Dhaka to commemorate those university students who fell to police bullets on February 21, 1952 while demanding recognition of Bengali as one of the two national languages of then undivided Pakistan.

February 21 is observed as International Mother Language Day by UNESCO.

Mamata Banerjee may be accompanied by renowned Bengali singer and former Trinamool Congress MP Kabir Suman, who is presently unwell.

Writing in her Facebook account, Taslima Nasreen, presently staying in exile in Delhi, says, “it was Mamata Banerjee who did not allow a protest by progressive students in Kolkata who were demanding execution for Jamaat leader and Bangladesh war criminal Abdul Quader Molla, but allowed nearly one lakh Muslim fundamentalists to come out in support of Molla in Kolkata.”

Abdul Quader Molla was hanged in Dhaka jail on Dec 12, 2013 after he was given death sentence for crimes against humanity during Pakistani rule in then East Pakistan.

Taslima Nasreen further writes: “Bangladesh has invited Mamata Banerjee, who joined hands with Muslim fundamentalists in her quest for Muslim votes, cheated Muslim community despite professing to be a devotee of goddess Kali, and yet offering namaaz and observing roza (fast).

The invitation to Mamata, a friend of Bangladeshi terrorists, is an insult to Bangladesh’s Feb 21 language movement.”

“About Kabir Suman, he is a fake from top to bottom. He was a Hindu, and later converted to become a Muslim fundamentalist. It was Suman who said, those terrorists making bombs in Burdwan were not Muslims, but BJP supporters. Suman not only defends, but support Muslim terrorists and fundamentalists.

These people will spoil the Dhaka Shaheed Minar by offering floral wreaths”, writes the Bangladeshi author.

Mamata Banerjee is visiting Bangladesh for the first time as chief minister on the invitation of Bangladesh Prime Minister Sheikh Hasina.

“I love Bangladesh and its people. We were one until Partition. We all have an emotional attachment with Bangladesh and if the people of Bangladesh are happy, we’re also happy. It is mutually beneficial to have good ties with each other,” Banerjee recently said.

Mamata recalled that she was the one who started ‘Bhasa Divas’ celebrations in Kolkata on Feb 21 when she was a Lok Sabha MP, with money from her MP local area development fund.

It has since become an annual feature in Bengal and Kolkata Municipal Corporation now funds the celebrations in the city.

Banerjee’s proposed trip to Dhaka marks a major turnaround from her stance in September 2011 when she dropped out of a delegation headed by then Prime Minister Manmohan Singh to Dhaka to sign treaties on Teesta water sharing and exchange of enclaves, says the ‘Times of India’.

She opposed both these treaties on grounds that the Teesta agreement would lead to a sharp decline in Bengal’s share of the river’s waters and adversely effect farming in North Bengal, while the exchange of enclaves would mean loss of land for the state.

But over the past few weeks, with pressure mounting on her government over the Saradha scam imbroglio, Banerjee has recently expressed support for exchange of enclaves.

She is also veering around to supporting the Teesta treaty, albeit with some of her concerns being addressed in a reworked pact, according to media reports.

Banerjee will also be accompanied by ministers Subrata Mukherjee and Firhad Hakim, as well as a cultural troupe.

She will have meetings with Prime Minister Sheikh Hasina and her senior cabinet ministers.