The National Board of Revenue yesterday honoured 122 VAT-paying firms in fiscal 2012-13 in a bid to encourage industrialists and businesses to deposit more value-added tax to the state coffers.

The award, which is now in its fourth year, recognised entities in three categories: production, service and business. 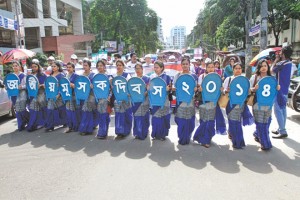 Of the firms, nine were awarded from the national level and 113 from district level; three were state-run energy sector entities and the rest were from the private sector.

Commerce Minister Tofail Ahmed handed over the crests to the top VAT payers from the national level at an awards ceremony held at the Raowa Convention Hall in Mohakhali.

The minister advised the revenue officials not to harass businesses in the name of collecting tax.

“We have to ensure satisfaction of businesses and people — taxes coming from them have facilitated us to increase the size of budget.”

VAT, which is levied on consumers indirectly, has been the main source of revenue for the state over the past several years. However, it is set to be overtaken by direct tax from this fiscal year.

“We should be more careful in tax collection. Revenue officials should maintain good manners and establish good relations with taxpayers in their duty to collect tax.”

Ahmed suggested the revenue administration increase the tax net instead of raising the tax burden on people. “It will allow expansion of business,” he said. Earlier, some representatives of shop owners raised complaints of harassment against revenue officials to catch VAT dodgers.

He said shops register the highest sales in the month leading up to Eid-ul-Fitr, the biggest religious festival in the country, which is marked by a shopping frenzy in all walks of life.

At this time, the seizure of documents is undesirable, he said.

“We suffered heavily for hartals and blockades last year, but we did not get waiver from VAT for that turbulent period.”

Ahmed, in response, criticised the BNP for enforcing violent programmes, hartal and blockades in the second half of 2013 in the run-up to parliamentary election, which affected businesses severely.

He said the country might have faced a similar fate as Thailand had the election not taken place on January 5.

“We had no other option but to hold the election as per the constitution,” he said, adding that BNP Chairperson Khaleda Zia made a ‘mistake’ by not taking part in the polls.

Mashiur Rahman, economic affairs adviser to the prime minister, suggested businesses maintain accounts properly. He said the tax system is efficient although there may be flaws in implementation.

The NBR aims to collect Tk 55,013 crore from VAT this fiscal year, up 19.9 percent from the revised target of the previous year.