In Bangladesh, more land is becoming salty and unfit for growing crops. It’s a pressing problem in this densely-populated country where most people farm for a living. But even on saline land, villagers can grow bountiful “vertical gardens” from soil flushed by monsoon rains.

In Chandipur village in southwest Bangladesh, lush vines sprouting pumpkins and gourds cover the tin roofs of small homes. This bounty sprouts from an unlikely source: large plastic sacks on the ground and other containers. 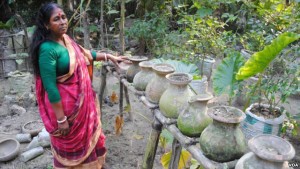 Shobitha Debna’s garden occupies just a corner of her dirt yard. But the 35-year-old mother in Chandipur grows hundreds of kilograms of vegetables each season.

The vegetables go a long way for Debna who makes a few dollars a day.

This wasn’t possible in Chandipur a few years ago. In villages like this one across Bangladesh, farmland has become more salty. Storm surges from Cyclone Aila in 2009 broke river embankments and flooded Chandipur. After that, vegetable crops failed.

But for three years, hundreds of villagers have grown “vertical gardens” – essentially vegetables grown from plastic sacks, giant containers made of plastic sheets and bamboo, as well as other receptacles.

Most of Bangladesh is at or below sea level, so the country is highly vulnerable to climate change. Storm surges in coastal areas add to the problem of increasing salinity.

More than half of coastal areas are affected by salinity, which makes land less productive.

This is a pressing concern for densely populated Bangladesh, which has 156 million people. Vertical gardens are one simple way that people can adapt to climate change and grow food.

Dr. Craig Meisner, South Asia country director for WorldFish Center, based in Dhaka, said, “There is no country with such population density where natural resources are stretched to their very limits.”

He added that if climate change adaptation “fails here it will certainly fail in many other countries. However, if it succeeds here it gives hope for the world’s future.”

Vertical gardens work because Bangladesh’s heavy monsoon dilutes salt in soil. From roughly July to October, about 1.5 meters of rain flushes salt from soil. At the end of the rainy season, villagers collect the flushed soil in large containers and later grow vegetables.

There are more people not in the program who made their own vertical gardens after seeing their neighbors’ designs.

Nurun Nabi, program officer at WorldFish Center, said last year two farmers stopped him on a village road. “They came and demanded to be members of our participant group so that indicates … they are very much interested and their feelings about the system are very positive,” said Nabi.

They raise sacks off the ground on bricks and add brick chips to improve water circulation and drainage.

Villagers also grow vegetables in large containers made from plastic sheets that line bamboo rings. This “vertical tower” measures more than a meter across. One of these large containers can produce more than 100 kilograms of vegetables. It costs about 900 to 1000 taka ($12 to $13) to build it.

Vegetables can potentially grow in any container. One villager, Shakuri Rani Debnath, even experimented with growing eggplant out of her daughter’s discarded purse and backpack.

Debnath said, she did not grow vegetables before, but she learned how to make vertical gardens; they help her family. She points to fat green gourds that are ready to harvest.