The whole world of cricket is going through a storm. However, in Bangladesh, there has been additional wind blowing alongside with the storm. 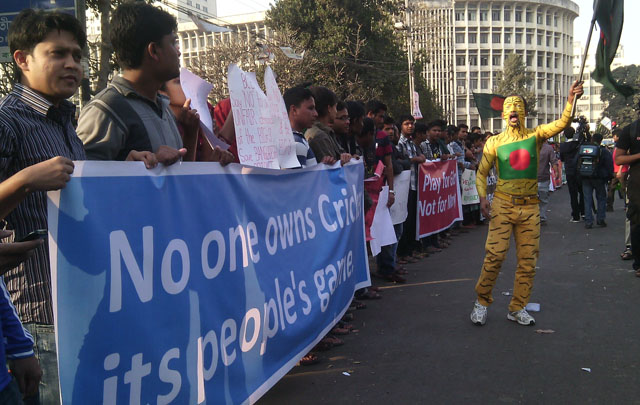 All other test-playing countries are going through pros and cons of the new proposal. They are thinking about the ‘shame’ of agreeing to the proposal that would make the big three literal rulers of the cricket world. Bangladesh doesn’t have the liberty to go that far. We are worried about only, and ONLY one fact—will they take away the right to play test matches that we earned through so many hardships?

This question brought over thousand people to Shahbagh yesterday. The proposal, ‘Position Paper’, has started to question the existence of ICC itself. It is also raising the question of Bangladesh not playing test matches.

The blueprint of the idea was going on from a long time. During a meeting of ICC in Dubai, all the members were slumped with the draft. Even after then it was not publicized. A website hacked opened the secret; and the cricket world went into a frenzy.

The proposal is apparently done by F&CA, which is a ‘working group’ of ICC. However, the controversy is, apart from India, Australia and England, none of the other members was aware of a proposal of this kind.

So, what does the ‘Position Paper’ talk about? Let us see.

The major point states only one desire; to make the three countries kings of the cricket world. The first step is to create EX-CO, which will scatter equality for the other members. Exco will be run by Cricket in India (BCCI), Cricket Australia (CA) and England Cricket Board(ECB).

The spirit of cricket is waning day by day next to the extreme greediness to earn money. The ‘Position Paper’ brings up this fact even more horrifically. Till now, the events like World Cup has given the member countries equal amount of earings. If the bill passes, the three big countries will get 80%

The proposal has more things that suggest that the ways of ICC are marching towards an end. Bangladesh however, couldn’t care any less about what other things are happening. This country is only worried about its future in cricket.

The 21 page draft has 6 paragraphs in it. The third point of the fourth paragraph is titled “Ranking System of ICC”. This paragraph states that from 2015-2023 the teams that ranks in 9th or 10th, will have to play for ICC Inter-Continental Cup. Currently the 9th team s Zimbabwe with 34 rating points and Bangladesh is on the 10th position with 18 points. The 8th and 7th teams are New Zealand (points) and West Indies (87 points) respectively. The hope of Bangladesh ranking a higher position within a year is really low. Instead of test cricket, these two team will have to play four day long Inter-Continental Cup! Two full members of the ICC will now have to play against deputy members! What a joke!

It is of no wonder that Bangladesh and Zimbabwe are getting the worst end of the stick. They are bound to be in the last two positions, seeing that they are the newest members in the test cricket family.

Hundreds of cricket fans formed a human chain at the capital’s Shahbagh intersection yesterday protesting India, Australia and England’s draft proposal, which, if implemented, would strip Bangladesh of chances to play test cricket until 2019.

The human chain, comprising mostly young men and women, called upon the Bangladesh Cricket Board (BCB) and the government to take a strong stance against the proposal.

They chanted slogans against the three countries terming them “jamindars” or landlords of the cricket world.
BCB has finally stated that we will stand against such autocracies.

However, the question is, how much Bangladesh affects the board? Will us standing against it nullify this outrageous proposal?

Let us hope it will.