Energy and water security are crucial to human and economic development. The two resources are now more interconnected than ever—significant amounts of water are needed in almost all energy generation processes, from generating hydropower, to cooling and other purposes in thermal power plants, to extracting and processing fuels. Conversely, the water sector needs energy – mainly in the form of electricity – to extract, treat and transport water. Both energy and water are used in the production of crops, including those used to generate energy through biofuels.

But energy and water resources are under unprecedented pressure, and there is growing competition for their use from people, industries, ecosystems, and growing economies. As the world’s population reaches 9 billion, demand will require a 50 percent increase in agricultural production and a 15 percent increase in already-strained water withdrawals. By 2035, the world’s energy consumption will increase by 35 percent, which in turn will increase water use by 15 percent and consumption by 85 percent, according to the International Energy Agency. 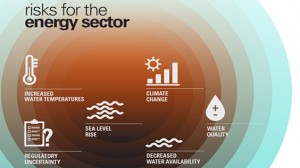 Climate change will add more uncertainty through increased water variability and more frequent and severe floods and droughts.  Energy systems are becoming ever more vulnerable to the impacts of climate change.  As temperatures get warmer, so do the rivers and lakes that power plants draw their cooling water from – which makes it harder to generate electricity in the coming decades.

“We cannot meet our global energy goals of extending access to the poor, increasing efficiency and expanding renewables without water.  The water energy interrelationship is critical to build resilient as well as efficient, clean energy systems. The time to act is now,” said Rachel Kyte, World Bank Group Vice President and Special Envoy for Climate Change.

Risks to the energy sector

Nearly 93 percent of the Middle East’s onshore oil reserves are exposed to medium to extremely high overall water quantity risks. Developing countries are the most vulnerable, as they often lack capacity to meet the rapidly growing need.

Despite these concerns, current energy planning and production is often made without taking into account existing and future water constraints nor risks of extreme events. As Executive Director of the IEA, Maria van der Hoeven, explains, “Planners and decision-makers in both sectors often remain ill-informed about the drivers of these challenges, how to address them, and the merits of different technical, political, management, and governance options. The absence of integrated planning is unsustainable.”

Solutions exist but they must adapt to address complexities

Several solutions exist to tackle the energy-water challenge and many countries are already taking the lead through bold action. For example, the UAE has sought diversification of its energy mix away from gas and toward clean energy. Its government plans to build the world’s largest solar-powered desalination plant that will process more than 22 million gallons of potable water per day and generate 20 MW of electricity. The UAE already has the largest power and desalination plant, a great example of an integrated solution for the water-energy challenge.

In addition, countries can reduce water dependency through the use of alternative cooling systems in thermal power plants and exploring brackish and saline water options and enhance efficiency of power plants, and replacing old, inefficient power plants.

These solutions though depend on many factors, including technology, environment, and financial, and they are site-specific. Integrated investment decision and planning can ensure that all the complexities of energy and water be properly addressed.

Building on the momentum

To mitigate the risks of the water-energy challenge, the World Bank launched a new initiative, Thirsty Energy. The initiative will formally launch at next week’s World Future Energy Summit in Abu Dhabi, UAE.

Thirsty Energy is a global initiative aimed to help governments prepare for an uncertain future now by breaking disciplinary silos that prevent cross-sectoral planning and quantifying tradeoffs and synergies between water and energy resource management.

One of the key aspects of this initiative is that the energy sector is the entry point for promoting the dialogue and devising solutions and tailors approaches depending on the available resources and institutional and political realities of a country.

The initiative demonstrates the importance of combined approaches through demand-based work in several countries, thus providing examples of how evidence-based operational tools in resource management can enhance sustain­able development. This created knowledge will be shared more broadly with other coun­tries facing similar challenges.