The “Women in Parliament (WIP) Global Forum award that Bangladesh received for reducing gender gap in politics, has been handed over to prime minister Sheikh Hasina. 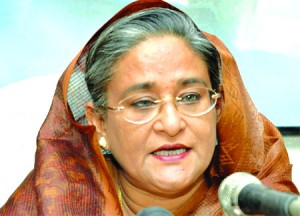 State minister for foreign affairs M Shahriar Alam on Monday handed over the award to the prime minister at the cabinet meeting at Bangladesh Secretariat.

Bangladesh received the award for its leading role in reducing gender gap in political sphere in South and South East Asia.

The state minister, on behalf of the premier, received the prestigious award conferred by WIP at its summit at the headquarters of African Union, Addis Ababa, Ethiopia on March 25.

Founder of the Switzerland-based WIP Silvana Koch-Mehrin had invited prime minister Sheikh Hasina to receive the award. But, state minister for foreign affairs M Shahriar Alam received the award on her behalf.

A video message, sent by the prime minister for the WIP Award ceremony, was played on the closing day of the WIP summit, said PM’s press secretary AKM Shameem Chowdhuri.

WIP award handed over to PM