A meeting was held between State Minister Finance MA Mannan and Board of Directors of Bangladesh Women Chamber of Commerce and Industry (BWCCI) to share about women entrepreneurship development related issues in Bangladesh.

The BWCCI team comprised of 7 members including Selima Ahmad, Founder of BWCCI and Sangita Ahmed, President of BWCCI along with other board directors, says a press release. 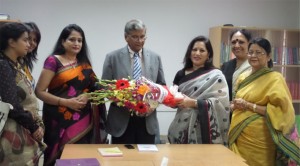 Congratulating the state minister, BWCCI President Sangita Ahmed informed that since its establishment in June 2001, women chamber is vibrantly working to encourage and strengthen women’s participation in the private sector as entrepreneurs and building their business capacity as well as doing policy advocacy in their favor to assist their growth and to improve their social and economic prospects.

Giving his speech honorable finance state minister MA Mannan said that the Government is committed to implement women development policy fruitfully. He stated that in the last 10 years, women entrepreneurs in Bangladesh has developed themselves considerably and has made contribution in the national economy. He said that his ministry will continue to extend all support to promote women entrepreneurship development.