The core objective of this initiative was to create awareness among migrants and recipients of foreign remittances about the safe and instantaneous way of receiving money through Xpress Money and NCC Bank. The event was launched at the Head Office of NCC Bank Limited. During the event TMSS and Ansar VDP Unnayan Bank were also introduced as payout locations of Xpress Money. 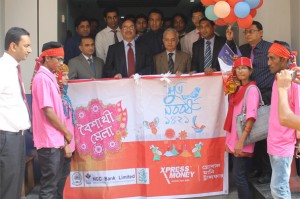 As part of this interactive road-show, an Xpress Money-NCC Bank co-branded Pick-up van travelled around the Maijdhee and Chowmuhuni areas. Brand promoters (BP) distributed co-branded ‘Hand Fans’ to all customers celebrating Bengali New Year. An enthusiastic team of folk singer performed on famous Bangla and local songs during the road-show. Fun and exciting games were also a part of the event and the winners were awarded branded gift mugs. The event helped to build awareness among people to use safe banking channels for foreign remittance.

Xpress Money is a global money transfer brand with a thriving presence in more than 150 countries in 5 continents across 170,000 agent locations. Working towards the goal of Bringing Home Closer to millions of migrants residing away from their homes, Xpress Money has come to be known as the most dependable international money transfer brand. Xpress Money provides its customers a simple, fast & safe way to transfer money through innovative technology, superior customer service and its extensive worldwide network.