The first death anniversary of Mahbubul Alam, former editor of The Independent, will be observed on Saturday, 6 June 2015. 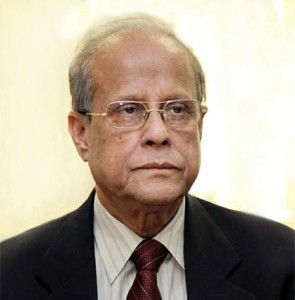 Also a former adviser to the caretaker government, Alam started his journalism career with Associated Press of Pakistan in 1957. Born in 1936 in Munsiganj, Alam went on retirement in 2013 after serving The Independent as the editor for 18 years.

He was Director General, External Publicity Wing and Spokesman for the Ministry of Foreign Affairs, Dhaka (1980-1983).

Alam was a member of the National Press Club, Dhaka Club and Officers’ Club (Dhaka).

He served as a member of the Governing Body of the Press Institute of Bangladesh (1980-1983).

He was the Chairman of Newspaper Owners Association of Bangladesh (NOAB).

He received an MA in Political Science from Dhaka University. In 1963, he received training in Journalism and Commonwealth Relations as a Fellow of Commonwealth Press Union, and attended a short course at Oxford University.