Two Bangladeshi workers were killed after stored concrete blocks fell on them at a ready-mix concrete plant in Al Hidd Industrial area of Bahrain on Thursday, the Daily Star reports.

“The Bangladeshis were killed on the spot when a crane carrying a five-ton piece of concrete accidentally hit the stored concrete blocks which in turn fell on the victims,” he added. 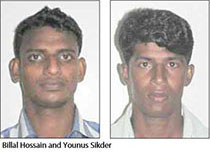 Their bodies were kept at Salmania Medical Complex mortuary, the embassy official mentioned. The victims were working with expired visas, he said.

Bahrain Labour Minister Jameel Humaidan visited the plant and said that his ministry would carry a thorough investigation to find out causes and the company’s legal violations, following which the company might face legal action, said a report published in the Daily Tribune, a Bahraini newspaper.

He also instructed the Inspection and Trade Unions Directorate to increase visits to concrete facilities to make sure that they meet all safety and vocational health standards.