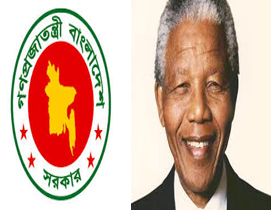 The national flag will be kept at half-mast at all government, semi-government and autonomous bodies during the period.

Nelson Mandela, who became one of the world’s most beloved statesmen and a colossus of the 20th century when he emerged from 27 years in prison to negotiate an end to white minority rule in South Africa, died late Thursday (South Africa time) at the age of 95.