Considering the recent arson attack on Standard Group an attack on the country’s RMG’s success story, apparel makers now seek a special law against such destructive acts to ensure exemplary punishment of perpetrators in a tribunal.

“A special law against such destructive acts must be enacted,” President of the Exporters’ Association of Bangladesh (EAB) Abdus Salam Murshedy told UNB over phone.

He said they have already talked to the Prime Minister about the formulation of such a law and also setting up of a tribunal.

“I believe, the BGMEA will come up with a formal proposal soon,” said Salam Murshedy, also a BGMEA former President. 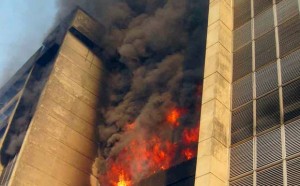 Standard Group is the largest single garment factory of the country and it operated in the most ethical way with full compliance, treated its workers ethically and it can be termed  the jewel of the crown for Bangladesh, according to the apparel makers.

Responding to a question about Standard Group, Murshedy said certainly it is an attack on the RMG’s success story. “It has been done in a planned way. It seems that a few but professional criminals are involved in the attack. We look forward to a fair investigation into the incident.”

He said they do not want to blame any quarter since an investigation is on. “There’ve been some vested groups — both at home and abroad– the entire activities of foreign agents are directed to vanish our success in the apparel sector.”

The apparel manufacturers demand a fair investigation into the arson attack and exemplary punishment of those responsible persons so that nobody dares to repeat such a heinous act in the future, the exporters’ leader said.

Murshedy, also the Managing Director of Envoy Group, said Bangladesh maintained a steady growth even during global economic recession, when most of the developing countries have failed. “The RMG industry has become a success story and has been growing rapidly.”

He said the latest incident in Standard Group needs to be considered as the last one so that the dream of the second generation can see the ray of hope.

Bangladesh needs the continuation of the success story and needs to keep the reputation unhurt in the global market. “To make that happen, people will have to come forward to cooperate with the key stakeholders of the sector so that the apparel sector can be protected from destructions for the overall wellbeing of the country.”

Upset over the mindless violence across the country, apparel manufacturers have decided to form a human chain on Saturday in front of the BGMEA complex in the city, aiming to send out a strong message to the politicians – ‘save the RMG sector, save the economy’.

The programme will start at 11am where the present and past leaders of the three trade bodies will address.

On December 2, the country’s top business leaders met Prime Minister Sheikh Hasina and urged her to take effective steps to defuse political violence saying their backs are pushed to the wall.

The business leaders also handed over a memorandum to the Prime Minister and representative of BNP Chairperson Khaleda Zia seeking an amicable solution to the current political crisis.