The key Bangladesh missions like the ones in Washington, Berlin, London, Paris, 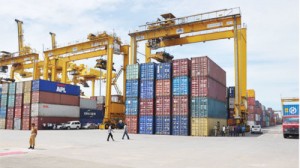 Madrid, Ottawa, Rome and the Hague have failed to achieve their July-February export targets while some other important missions like Stockholm, Tokyo, Riyadh, Canberra and New Delhi have been able to reach their targets for the eight-month period.

Of the 53 Bangladesh missions, 23 met their respective export targets set for the period, according to the latest statistics available with the Export Promotion Bureau (EPB).

Of the 30 missions that could not achieve their targets during the period under review for the first eight months of the current fiscal year, exports still marked a rise for 10 of them over the corresponding period of the last fiscal year 2013-14. These missions are in London, Madrid, Paris, Rome, Brussels, Beijing, Muscat, Manama, Moscow and Kuala Lumpur.

The EPB figures also revealed that out of the 17 Bangladesh missions having commercial wings, only seven have achieved their export targets while 10 others could not achieve their respective targets.

The seven missions with commercial wings, which achieved their respective export target, are in Tokyo, Canberra, New Delhi, Dubai, Geneva, Yangon and Tehran.

Although the remaining 10 commercial wings could not achieve the target, the earnings of seven of them except Washington, Berlin and Ottawa still saw increase over the July-February period of FY’14. These are in London, Paris, Madrid, Brussels, Beijing, Moscow, and Kualalampur.

The 23 Bangladesh missions that succeeded in achieving their targets during the period under review accounted for $3.1 billion while the export earnings of the remaining 30 missions, which failed to achieve their target, totalled $ 16.7 billion.

The highest earnings over the eight-month period, some $ 3.70billion, almost one-fifth of total exports, were registered by the Washington mission, followed by the mission in Berlin which accounted for $ 3.36 billion and London $ 2.16 billion. The strong showing from EU member states continued with the Madrid mission fetching $ 1.12 billion during the July-February period.