Despite being the third largest economy in the world by purchasing power party, the living standards of India’s underprivileged citizens are probably among the worst in the world. Even its much poorer neighbours, such as Nepal and Bangladesh, have fared better in areas of health and social development.

The spectacular economic growth in India over the past two decades has made it a global economic power-house. Between 1990 and 2011, India’s economy grew at a compound rate of around 7%  per year in current dollars and the per capita income  increased almost four times from $860 to $3,620. India  is currently the third largest economy in the world by purchasing power parity (PPP) after the United States and China. What are the developmental consequences of this surging economic growth for India’s 1.2 billion people? Has economic growth improved the living conditions of its citizens?

The evidence from the World Bank’s Human Development Indices shows that health and education indicators have significantly improved, with a noteworthy decline in maternal  and  infant mortality and progress in youth female literacy. Maternal deaths occurring during childbirth have fallen three times while the infant mortality rate has declined from 81 to 47 deaths per 1,000 live births.  Youth female literacy rate has increased to 74%. Average life expectancy, the percentage of the population with access to sanitation facilities, immunisation rates and average years of schooling have all increased over the last twenty years but not as rapidly as India’s per capita income. These trends clearly indicate that economic growth between 1990 and 2011 has significantly enhanced the health and well-being of the wider Indian society.

Lagging Behind its Neighbours

While economic growth is absolutely crucial in raising the living standards of the population, the nature of growth and public policies with respect to basic education, public health and other associated welfare programmes also determine development trends and how much welfare the citizens enjoy. India is the second most unequal country in South Asia. In 2010, the Gini coefficient for India, which measures income distribution, was 33.9 indicating that a large fraction of national income was concentrated in  the  hands of a few and income distribution was heavily skewed in favour of the rich. Sri Lanka with a Gini coefficient of 36.4 was the most unequal south Asian country and Pakistan the most equal with a Gini index of 30.0. Bangladesh and Nepal’s Gini coefficients were 32.1 and 32.8 respectively.

Does the income inequality  present in these south Asian countries have an impact on  the health and social well-being of their citizens?  The data in Table 1 compares India with its four neighbours on various indicators between 1990 and 2011. Sri Lanka is well ahead of India and other countries with regard to all indicators. Compared with its four neighbours, progress in health and social development in India has not been in proportion to either its rate of economic growth or its high per capita income. India has enjoyed the fastest growth in per capita income among the four countries. Incomes in Nepal and Pakistan have grown at an annual average rate of 4%, while incomes in Bangladesh and Sri Lanka have grown at 6 and 6.6% respectively.

Despite India’s rapid economic growth, Nepal and Bangladesh have overtaken India in various basic social indicators. In 1990, the average life expectancy in India was comparable to Bangladesh and higher than Nepal’s. In 2011, life expectancy in India was lower than that in Nepal and Bangladesh. A similar pattern holds for infant mortality. In 1990, India’s infant mortality rate was about 20% lower than that in Bangladesh, Nepal and Pakistan. By 2011, India’s infant mortality rate was higher than that in  Nepal and Bangladesh, but was lower than that in Pakistan. India has also fared poorly in providing sanitation facilities and increasing its immunisation rates. In 2010, only about one-third of its citizens had access to improved sanitation facilities.  While its neighbours have achieved almost universal DPT immunisation coverage of children aged two years (with the exception of Pakistan), India barely increased its immunisation rate to 72% in 2010. Furthermore, India’s efforts in curbing maternal deaths pale in comparison to Nepal’s impressive achievements in that area. Nepal’s maternal mortality ratio was 170 in 2010, compared to India’s 200. India has also fallen behind in the schooling indicators such as average years of schooling and youth female literacy rates. Bangladesh has overtaken India in both measures despite being some way behind a few decades earlier.

aRank is estimated due to missing data for Nepal.

Table 2 presents India’s ranking in South Asia on the various social indicators in 1990 and in 2011. India’s per capita income is high when compared to the others, excluding Sri Lanka; it is currently ranked second, up from the third position it held in 1990. However with respect to other indicators, India’s rank has actually fallen. Its rate of social development has lagged behind that of Nepal and Bangladesh.  During the 1990s, India was ranked amongst the top-two in respect of many indicators. Two decades later, and notwithstanding its stellar economic performance, India is in the bottom-two, and for some indicators (proportion of underweight children and immunisation rates) it is the worst performing country. Despite Bangladesh’s per capita income being almost half of India’s, it has performed much better in most of the basic indicators, and it has exhibited the most dramatic improvements in basic living standards among the five countries. Nepal has also caught up with India and has surpassed India in curbing maternal mortality, immunisation rates, youth female literacy and life expectancy at birth and this is in spite of Nepal’s per capita income being one-third of India’s. From these trends it appears that compared to its much poorer neighbours, India has performed poorly and has regressed.

In the case of India, indicators of social well-being did improve during the period of India’s rapid economic growth. But when examined in the context of its south Asian neighbours, India has moved backwards not forward. With respect to the indicators examined here, India’s ranking has slipped in comparison to its south Asian neighbours. India cannot afford to have living standards of  millions of its citizens compared to those prevalent in some of the poorest countries in the world and yet at the same time challenge for global economic supremacy. The development strategy that is being implemented is not working. Economists take the causal relationship between economic growth and living standards as a given, but the case of India and its neighbours tells us something different.  Civil society organisations and NGOs know well that growth does not translate into better living conditions. We argue that it is the planning and implementation of public policies seeking to advance collective well-being which appear to be more important than the scale or rate of economic growth.

Ishraq Ahmad until recently was  a former research associate at the Institute of South Asian Studies, National University of Singapore. 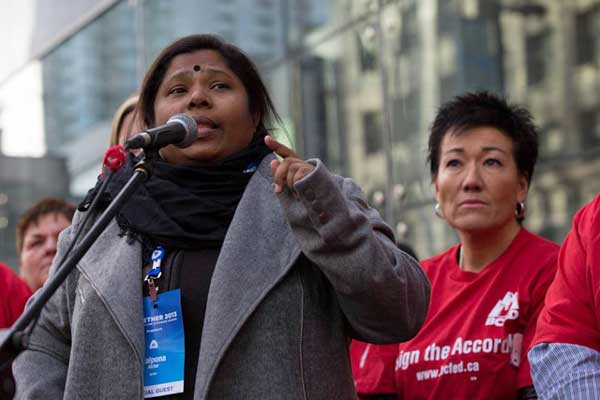