Prominent retailers and labor groups has created a $40 million fund to aid the families of victims of the garment factory building collapse in Bangaldesh that killed 1,100 people, officials said.

The Bangladeshi government, several prominent retailers and labor groups joined together to create the fund to compensate the families of those killed and those injured in the April 24 collapse, the New York Times reported Monday. 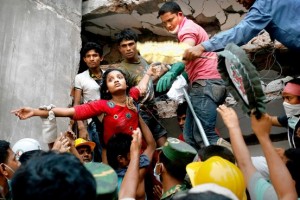 The accident was the deadliest disaster in garment industry history.

Among the contributors to the fund were four retailers, Bon Marche, El Corte Ingles, Loblaw and Primark. No U.S. retailers have so far signed on to contribute, the Times said.

Officials involved in the negotiations to establish the fund said the families of the dead, on average, would receive $25,000. The per capita income in Bangladesh is about $1,900, and the money is scheduled to be distributed in payments so the families have a steady source of income for years to come, the newspaper said.

“We think the agreement is a really good result,” said Ineke Zeldenrust, international coordinator of the Clean Clothes Campaign, a European anti-sweatshop group. “The agreement will deliver to all the victims and the families of the RanaPlaza disaster full and fair compensation in a credible manner. What we need now is for other companies to agree to pay into the fund.”