About 53,000 people left Bangladesh and Myanmar on treacherous smuggling boats bound for Thailand and Malaysia this year, about 540 of them dying on the journey, the UN refugee agency said Friday.

Indonesian policemen help a Rohingya Muslim from Myanmar in Banda Aceh on April 8, 2013, after they were stranded on the remote island of Pulo Aceh.

The majority are stateless Rohingya Muslims, fleeing ethnic tensions in Myanmar or poor prospects in Bangladesh, as well as Bangladeshis looking for a better life, the UNHCR said in a report. 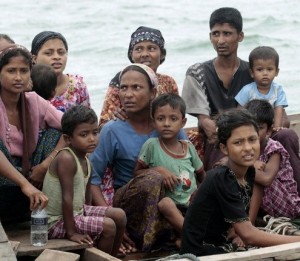 Some 50,000 of these left from the Bangladesh-Myanmar border area, 15% more then left between January and November last year, and more than triple the estimated number of departures during the same period in 2012.

Almost half — 21,000 — of these passengers left the border area in the last two months, a 37% increase compared to October and November 2013, the UNHCR said.

The remaining 3,000 came from the Sittwe area of Myanmar.

“Several individuals reported incidents of rape and some said they had been trafficked, though the coercive conditions of travel often blurred the distinction between smuggling and trafficking,” the report said.

Rohingya Muslims, viewed by the UN as one of the world’s most persecuted minorities, have long fled discrimination and repression in predominantly Buddhist Myanmar.

But the flow has accelerated into a growing exodus two years after deadly clashes erupted between Buddhists and Rohingya in Myanmar’s Rakhine state, activists say.

The conditions on board the boats are often dire, with water, food and space in short supply, the report said.

Passengers are sometimes on board for weeks if the smugglers—armed crews from Thailand and Myanmar—take their time and try to pick up additional passengers along the coast.

After interviewing migrants who made the journey, the UNHCR estimated that 540 people died along the Bay of Bengal and Andaman Sea route in 2014.

“Deaths were attributed to severe beatings by the crew, lack of food and water, illness, and heat,” it said. Some passengers jumped into the water in desperation.

On arrival, things were often not much better.

Smugglers demand only a small fee before departure but then refuse to release the migrants until their families pay more, often holding them for months in brutal camps.

With each journey costing between $1,600 (1,300 euros) and $2,400, the human smuggling trade along the route was estimated to generate annual revenues of $100 million.

Hundreds of the arrivals have been arrested by the authorities in Thailand and Malaysia, some claiming refugee status and others being deported, while others continued their journey onto Indonesia or Australia.