60 modern ambulances are ready to be added at the divisional and district level fire service stations. 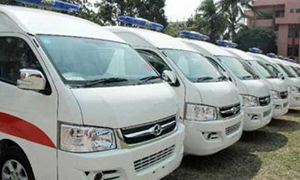 The government took the initiative to spread the service of fire service and civil defense department.

The project will be placed at Executive Committee of the National Economic Council (ECNEC) on Tuesday for final approval and the total cost of the project was esteemed Tk 34 Crore.

Sources said that the project will be implemented within 2015.

Fire service and civil defense department sources said that some 285 fire service station has only 75 ambulances, which means most of the stations are running without ambulance.

Some 14 ambulance for Dhaka division, 11 for Chittagong, six for Rajshahi, seven for Khulna, six for Barisal and five ambulances for Rangpur division will be allotted.

Beside, there are 10 special ambulances which will be used for protocol of VIP and VVIP.