In Bangladesh, a draft of the Child Marriage Restraint Act has been sent to the Cabinet stating the minimum age of marriage will remain at 18 — but it will come with a clause.

This new “clause” means that while the legal age of marriage will remain at 18 for girls, marriage will be legal at 16 under special circumstances — if it is their parents’ wish, for example, or if a girl becomes pregnant. 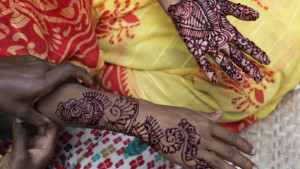 Essentially, the new clause will allow the continuation of child marriage and prove perilous for young people in Bangladesh.

Bangladesh currently has one of the highest rates of child marriage in the world, according to a survey from Plan International and icddr,b, an international health research organization based in Dhaka. According to the survey, 64 percent of women aged 20-24 in Bangladesh were married before the age of 18 — the minimum legal age of marriage for females in the country.

For many in Bangladesh, the recent announcement has been met with shock and disappointment.

Just last year, the government approved the draft Child Marriage Prevention Bill 2014 in principle. The bill stated that punishment of up to two years in jail and a penalty of 50,000 Bangladeshi taka ($630) would be given to those who performed or facilitated early or forced marriage.

However, now the state says they “can’t stop anyone from falling in love.” But is child marriage really a solution for teenage love?

I recently met a 16-year-old girl by the name of Salma who lives in a slum in Dhaka. Salma’s friends challenged her to woo a boy. Wanting to keep face in front of her peers, Salma went along with the challenge, unaware it would change her life forever.

“One day I went to the boy’s room to talk, and my friends locked it from outside,” Salma told me. “They called the people from the community and alleged that we were having an illicit relationship.”

Torn between the community and their daughter’s wishes, Salma’s parents felt they had no choice.

“Despite my objection, I was married off,” the teenager said. Nowadays, Salma’s father bears the brunt of his daughter’s family costs, while physical violence has become part and parcel of her daily life.

“I was a trained volunteer,” Salma confided. “I rescued one child from this slum from a fire. Now, I am not allowed to attend any of the community meetings or development activities.”

Salma fears her husband could leave her at any time for another girl, a common practice in the slum areas of Dhaka.

For me, Salma’s story demonstrates why it is imperative that the marrying age for girls remains at 18 — with absolutely no exception.

If a clause is included in the law, it will only make the situation worse. It is essential that the government focuses on how to change the mindset of people rather than looking for easy ways to “legally” decrease the percentage of child marriage.

At the child rights organization I work for, Plan International Bangladesh, we are educating children and communities about the risk of early child marriage as part of our Because I am a Girl campaign.

We’ve partnered with a group of children known locally as the Wedding Busters, who are working with the local government and communities to create child-marriage-free zones. When they hear about instances of child marriage, they immediately form a committee to decide the best way to tackle the situation. Then, one of them will go and speak to the child’s parents and explain why they should call off the wedding. So far, the Wedding Busters have stopped seven child marriages in their community.

Child marriage continues to be a violation of human rights. It adversely affects education, health and well-being of girls, and perpetuates cycles of poverty. Child brides meanwhile experience the detrimental physical, psychological and social consequences of early marriage.

It is essential we do everything in our power to put an end to this dangerous practice.