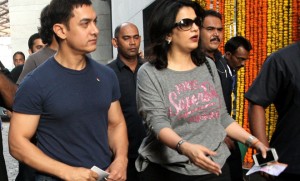 Aamir had a promotional event of his upcoming film ‘Dhoom 3’ to attend where he would be dedicating the ‘Dhoom Machale’ song to Sachin. The event was earlier scheduled to take place at 4.30 pm at YRF studios but it will now begin at 6 pm.

The actor left the studio when he heard that West Indies is all out as he did not want to miss India batting by any chance, a statement said.

Aamir requested producer Aditya Chopra to postpone the event and said that he will leave Wankhede stadium by 4.30 pm when the match gets over.

The actor was seen wearing his blue T-shirt which according to him is lucky.