AC Milan lost 1-0 at Udinese in the Italian league on Saturday and failed to boost its confidence for the Champions League clash at Atletico Madrid next week. 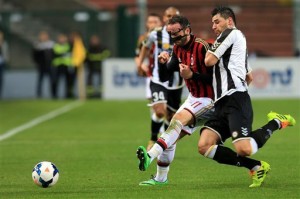 Antonio Di Natale scored the only goal in the 66th minute, finishing off a great team move by Udinese.

“We’re disappointed,” Milan coach Clarence Seedorf said. “You’re never happy when you lose and certainly more so when certain mistakes could have been avoided. The lads tried tonight and gave what they could but we need to be more clinical in front of goal.

“We have to keep in mind our good performances and not forget all that we have done well up until now. It’s a football match on Tuesday and we can win it, we are convinced. Everyone saw the first leg and we have to pick up from that performance.”

“It’s a fantastic victory against a great club like Milan,” Di Natale said. Being International Women’s Day, he dedicated the win to his wife “and all the women.”

Milan enjoyed the best opportunities in the first half and forced teenage goalkeeper Simone Scuffet into several fine saves, notably denying Giampaolo Pazzini from close range with one hand.

Cristian Zapata should have given Milan the lead moments earlier but headed a corner wide after being left unmarked at the far post.

Scuffet also made a superb diving save shortly after halftime to parry Robinho’s header from point-blank range.

Milan goalkeeper Christian Abbiati — who made his league debut when Scuffet was only two years old — pulled off a brilliant save to deny Roberto Pereyra early on.

Udinese improved after the break and took the lead when Pereyra released Bruno Fernandes, who crossed for an unmarked Di Natale to slot home.

Substitute Mario Balotelli blasted over the bar shortly afterwards for Milan, while Allan curled an effort narrowly past the top corner for Udinese.   Also, relegation-threatened Catania drew 1-1 at home to 10-man Cagliari.

Cagliari had to play out the final 17 minutes a man down after Danilo Avelar was sent off following a second booking.

Catania almost made the most of the numerical advantage but hit the woodwork twice in quick succession as first Cristiano Biraghi’s effort crashed off the post before Alexis Rolin headed off the bar. Source : UNB