About a year back the Economist had an editorial piece titled “Out of the basket” and subtitled “Lessons from the achievements – yes, really, achievements – of Bangladesh.” The more in-depth piece that followed appeared somewhat bemused at how a country once labeled a ‘test case for development’ could have made such striking gains in development outcomes over the past two decades (see table 1). These gains were hard to reconcile amidst Bangladesh’s natural and Rana Plaza-type disasters, volatile politics and unfavorable rankings on governance indicators – themes which the Economist has often covered before, and after, this “achievements” piece. 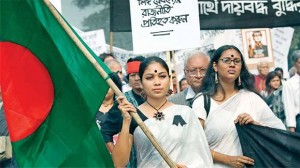 This past week the Lancet has come out with a special issue on Bangladesh which the journal editors say is in order to “investigate one of the great mysteries of global health.” Specifically the published papers are meant to explore how “Bangladesh has made enormous health advances and now has the longest life expectancy, lowest fertility rate and lowest infant and under-5 mortality rates in South Asia despite spending less on health care than several neighbouring countries.” Both these publications help explain the various ‘Bangladesh paradoxes’ but they also overlook, or underplay, a few critical factors.

Some of the drivers of these gains in health outcomes summarized in Amartya Sen’s ‘What’s happening in Bangladesh?’and Mushtaque Chowdhury et al’s ‘The Bangladesh paradox: exceptional health achievement despite economic poverty’ Lancet contributions are also identified by  the broader Economist ‘achievements’ story .  They both argue that the manner by which women have been at the centre of development gains is unprecedented – whether as community-based health care workers  contributing to the halving of fertility in one generation, or as girls outnumbering boys in school, or as recipients of micro-credit loans or as the backbone of the $25 billion garments industry. Second there is general agreement in both the Lancet and Economist view, as well as many others, that a pluralistic approach to the design and delivery of services is particularly unique in Bangladesh and has contributed to these outcomes. Specifically the role of NGOs, including some such as BRAC which are among the largest in the world, in working as partners with government and the pioneering role of the Grameen Bank are highlighted. Pluralism also includes the local private sector pharmaceutical companies, which protected from foreign competition during their infancy, have also provided access to low-cost generic drugs and are now a significant part of Bangladesh’s export basket. Self-sufficiency in food through sharp increases in rice yields (Economist) along with significant improvements in disaster management (Cash et al in the Lancet) and the role of made-in-Bangladesh innovations in health delivery (Adams et al in the Lancet and a subsequent issue of the Economist describing a new ‘birth mat’ which has significantly reduced child-birth complications) are other factors which are examined.

However there is an element which is either missing or under-stated in both these review pieces and that relates to the role of increasing incomes. Bangladesh has averaged over 6% economic growth over the past decade, its GDP of around $150 billion has more than tripled since 2000 and as Pritchett and Summers show in figure 5 of a recent paper the volatility of its growth is one of the lowest in a cross-country sample. One reason behind the steady growth and limited volatility is that macro-management has been sensible, with fiscal deficits typically averaging around 4% of GDP, steadily declining public debt to GDP ratios along with the build-up of macro buffers with a current account surplus and international reserves close to six months import cover. Counter-cyclical policies have also shielded the economy from exogenous shocks such as in the immediate aftermath of the global food and financial crisis in 2008/09 using a mix of short term export subsidies and expanded safety nets for the poor along with an easing of policy interest rates.  The ability to react to natural disasters highlighted in the Lancet extends to the ability to react to macro shocks which is less well known. Not only is aggregate volatility low, but growth has been equitably distributed with inequality (measured by the consumption Gini) unchanged since 1995. Poverty fell from 58% in 1990/91 to 32% in 2010 with almost 17 million people moving out of poverty in the 2000-10 period. This pattern of growth has also led to greater convergence across regional divides since 2005. One key difference with other countries is that household income fluctuations are smoothed by the wide availability of reasonably priced credit, in the form of micro-finance, as shown by recent research. As such these equitably distributed economic gains have meant that a larger share of the population can afford better quality food, sanitation, shelter and access to education and health – all of which are confirmed empirically in the latest World Bank Poverty Assessment report.

Reflective pieces on the steady process of improvements in the lives of the 150 million or so ordinary Bangladeshis are unlikely to make headlines. These Lancet and Economist magazine pieces are important contributions in this respect as they help reshape a prevailing narrative, often grounded in dated perceptions and images. The only issue is that both appear to overlook the importance of careful macro management, and more generally the enabling environment that has generated reasonably high pro-poor economic growth with low volatility, with their consequent impact on poverty and social outcomes.

So while there remain many poor Bangladeshis, the country is fast approaching the World Bank lower middle income threshold, and it is less of a paradox when one associates the rate – and not level – of poverty reduction with the rate of improvement of social outcomes.

Looking forward there is no room for hubris for Bangladeshi policymakers as the challenges of maintaining, and ideally accelerating, these socio-economic gains are not straightforward. But if history is any guide then it is likely that the country will continue to pursue its mix of orthodox macro and unorthodox micro policies and come up with ways to overcome its odds, make the most of its current demographic dividend,  diversify its economy, further reduce poverty and strengthen social outcomes.