The ministry of power, energy and mineral resources has requested the home ministry for additional security around the power plants across the country, in view of the worsening political situation.

“We have asked for additional security around the power plants which are not under Key Point Installation (KPI),” said Tapos Kumar Roy, Additional Secretary of the ministry.

“At the same time, the ministry has also asked the power supply entities to build up own security measures from their own resources without fully depending on the government,” Tapos said. 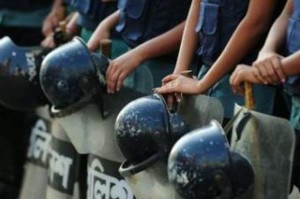 Members of the Bangladesh Army have been guarding 10 KPI power plants from before, but it has not been possible to bring all the sub-stations under such security, as those are   located  in  different areas, the official said.

There are 40-power supply sub-stations under Dhaka Power Distribution Company (DPDC), most of them being under KPI security. Contrary, DESCO has 58 power plants of which only eight are under KPI, with the  security of the remaining 13  being under Ansar as per suggestion of  the power ministry.

Besides, Power Development Board (PDB) controls 29 sub-stations of which 16 under KPI. A step has been taken to deploy Ansar around the remaining 13 sub-stations, sources said.

Rural Electrification Board (REB) has 457 sub-stations under its 70 authority, most of which are without sufficient security. REB has not its own security force to guard the sub-stations. REB depends on local administration for security of those sub-stations. But Police and other security forces in the rural areas are busy to tackle the blockade and hartal.

Power ministry has planned to bring most of the power plants, power sub-stations and power grid under KPI security measure, the ministry sources said.